Furniture and design retailer XTRA's new flagship store in Singapore's Marina Square includes a Herman Miller "Shop-in-Shop" that draws inspiration from the furniture it showcases. Encircling the space is a 20-meter arched structure that, from a distance, gives the appearance of tufted fabric pulled taught over a frame. But in fact, this structure is built from a plywood "skin" that designer Pan Yicheng of PRODUCE Workshop has dubbed "fabricwood." 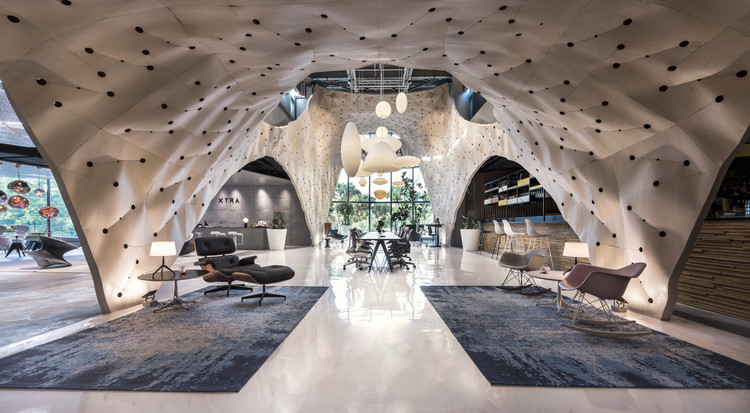 In conceiving this material, PRODUCE drew inspiration from Herman Miller chairs, which use molded plywood and elastic mesh to create an ergonomic, frameless structure. The plywood element in the Shop-in-Shop is actually composed of 280 panels that bend and fold to form a shape with a minimal frame structure that echoes the iconic Herman Miller HM logo.

Processing wood to look like fabric is no simple feat. The procedure begins with drawing a CNC pattern on flat plywood. Yicheng and his team employ a tailoring technique called darting to cut slits from the surface, allowing the wood to bend in the same way fabric conforms to the body. These slits are then "stitched" closed with cable ties, with rivets connecting the edges of the modular panels.

Finally, two layers of plywood are connected together with wooden dowels and rivets to give thickness to the walls. A combination of physical and computer modeling simulate the geometry of the final 3D form. The end result is a billowing structure that looks almost upholstered.

Yicheng attempted a similar project for XTRA and Herman Miller in 2012, where he layered interlocking plywood triangles to create a mesh shell. This 2016 version was, according to the designer, "more demanding to conceptualize and prototype," but still incorporates the warmth and lightness that wood provides.