CORE Architects has revealed designs for a 60-story tower in Mississauga, Ontario, that when completed, will become the tallest building in Canada’s 6th largest city. The first of an eventual 10 towers that will make up the $1.5 billion, master-planned community of M City, the building features an undulating facade that was conceived as a continuation of the design mentality established by MAD Architects’ nearby Absolute Towers. 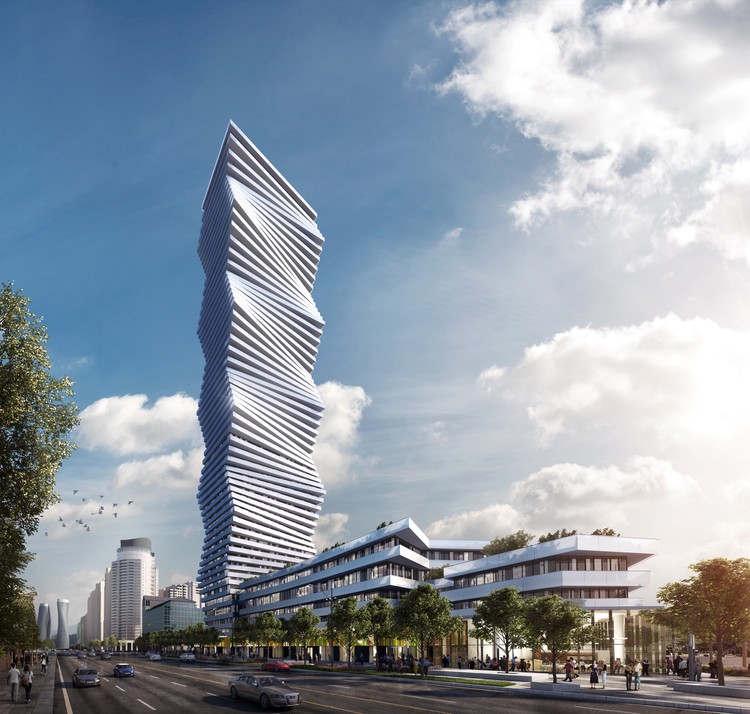 The tower will serve as a landmark of the first phase of the 15-acre community, which is being developed by Toronto-based Urban Capital Property Group and project owner Rogers Real Estate Development Limited. CORE Architects’ design, chosen through an invited design competition, is recognized by the unique geometry of its facade, which results from the twisting of seven floor plates that skw as the building rises, stacking in a repetitive pattern. The resulting figure creates the impressions of “fluid movement and lightness of mass.”

“M City’s tower will be instantly recognizable, but equal attention and care was given to the podium, which anchors the project. Not only does the podium enable the lifestyle component of the building, but it defines how this and future phases interact with the streetscape and the fine grain network of blocks that characterize the master plan,” explains Mark Reeve, partner at Urban Capital Property Group.

At its base, a faceted glass podium will house retail and public space, while accommodating a large rooftop terrace. Other amenities will include chef’s kitchen and dining room, small and large lounges, a kids’ lounge with games and play zone, gym and yoga/spinning rooms. Interiors for the project have been conceived by interior design firm Cecconi Simone, drawing inspiration from the architecture’s dynamic geometry.

“It was important that the interiors and amenities achieved the same attributes as the architecture:  fluidity, movement, excitement. The amenities flow from interior to exterior and the spaces are not simply square or straight but are sculpted in angular planes defined with different materials. Floor finishes wrap up walls, planes are folded and twisted, sunlight and artificial light are manipulated to enhance the spaces,” says Elaine Cecconi, partner, Cecconi Simone.

The full masterplan has been approved by the City of Mississauga as part of action plans to “build a complete city.” The development will be integrated into the regional public transit network, connecting the community with Mississauga’s growing downtown district.