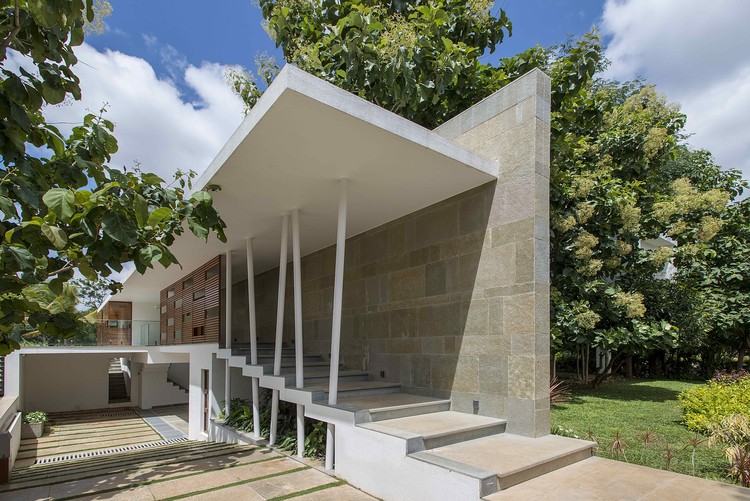 Text description provided by the architects. The site is a 10000 sqft plot laden with trees within a gated community. These kind of developments along the edge of the city offer low rise and tree laden surroundings as coveted luxury lifestyle venues. The plot is bound by roads on the eastern and southern edges. The longer edge of the site is along the eastern direction. The idea for this four bedroom house is  about the negotiating the trees and using these conditions to bring about a sense of place. The central space of the site is occupied by a jacaranda, mango, chikoo and some teak trees.

Our intention of retaining them resulted in the reading of the site as three longitudinal spaces. The central space accommodating the existing trees was read as open spine which would help anchor the design to the site. Further programmatic bars were considered on either side of the open spine. One of them along the eastern edge addressed the familial needs of public spaces such as the living and dining. The other along the western edge was occupied by  the more private bedrooms. Both these are connected by a space which is seen as the family space overlooking the central spine. These spaces are manipulated in section to address the ground plane.

As a result parking, servants, utility and an office is accommodated beneath the living and dining space. A multi-purpose space which is complemented by a bar is located beneath the bedrooms. This lends more privacy to the bedrooms and allows the multi-purpose space at the lower level to integrate with the surrounding landscape. The bedrooms are directed towards the central spine through balconies and windows while the access corridor to the bedrooms is pushed out to the outer edge buffering the space from the western sun. The terrace over the living and dining is designed as a garden.

The uppermost terrace accommodates a spa which has its own terrace garden flanked by canopy of the existing trees. The greening of terraces restores and adds to the existing verdure. The connecting space seen as a pavilion between the two bars expresses the intent of the project. The pavilion is edged by dark reflecting pool capturing the mango tree and the sky on one side while the other side it spills on to a deck sheltered by the jacaranda tree. The teak trees are allowed to penetrate through the structure space around it is used as decks for the bedrooms.

Each of the unique trees along the spine gets an identity owing to the spatial organization and the manipulation of surfaces and levels. Materials like limestone, wood and white painted surfaces are used to express the surfaces of the various planes which complements the surrounding greenery. While the wood is used as a screen wrapping around volumes filtering light and lending privacy, the lime stone and the white painted become animated surfaces as a result of play of light filtering through the trees on them reflecting the character of the site and surroundings. 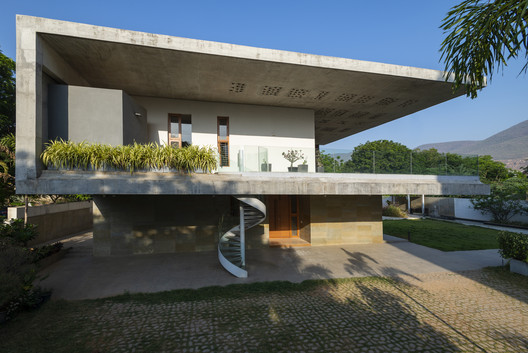