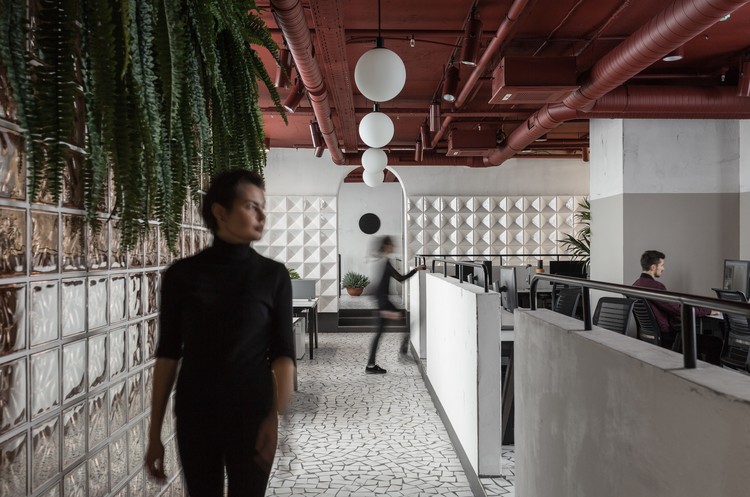 Text description provided by the architects. If you look at the society in Belarus you can still find many traces of Soviet era present. This is embedded both in people’s way of thinking and lifestyle as well as architectural environment: the interior of the subway we take was designed in the 70s and 80s, and the streets are full of modernist buildings of those times. However, the attitude to the significance of this artistic phenomenon is filled with disdain. Such speculations and the interest in the aesthetics of the Soviet and international modernism led us to the idea of creating a space which inherits local modernist tradition and demonstrates its stylistic significance.

The interior of Vizor company is a reinterpretation of Soviet design and architecture of the 70s and 80s of the 20th century where we focus public attention on the aesthetic value of this trend.

In general the interior is filled with light and clear space extending and flowing from one volume to another. The floor designed in the same material and the red ceiling are the main elements shaping the interior. The floor represents the spirit of Soviet public buildings embedded into a pattern of small tiles of different geometric shapes. The ceiling with open communications is painted in a complex accent color. The entrance is designed in the form of a rounded lobby executed with the help of light-rose glass blocks. The entrance unit is topped with a strap of green hanging plants. As you exit the lobby you are welcomed by a dimensional inscription of the company name made of brass sheets. The style, font and material were chosen based on the inscriptions of Soviet underground stations. Standing right at the entrance we hit the main axis of the entire space.

Long vista is supported by working areas proportions as well as the rhythm of hanging spherical lamps; it concentrates in the arch and ends with a black point. The effect of such method is almost sacred. The central interior panel is located perpendicular to this axis. The ceramic modules were analyzed by comparison with analogues and designed into the general composition. A two-tone wall cover complements the main area. One of the zones is formed by low partitions in the style of Le Corbusier handrails.

The walls of the second workspace are finished with wood panels, just like the facades of the kitchen. Kitchen stylistics is complemented by Scandinavian furniture and abstract composition based on the modernist art of the last century. WC facilities organically convey modernity and spirit of the 30s. We also used specially designed ceramic elements and wash-basins in the proportions of those years. The interior is filled with neatly selected techniques and details, but at the same time looks light and airy. This work is a reinterpretation of the original local architectural and design tradition. 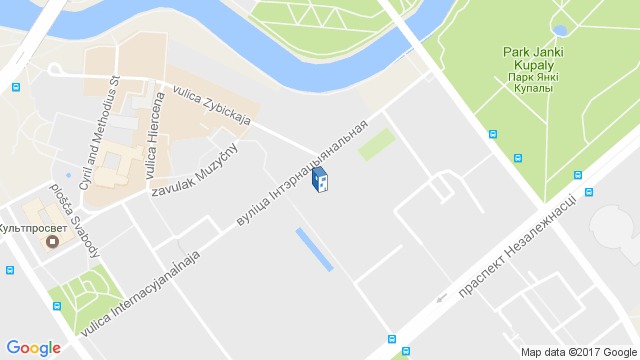 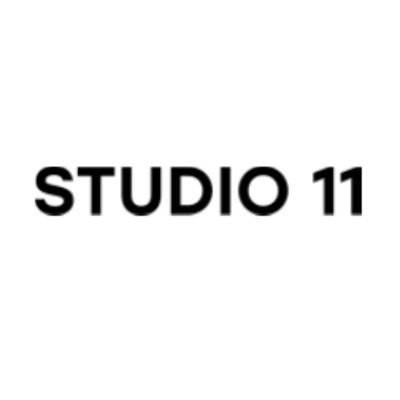 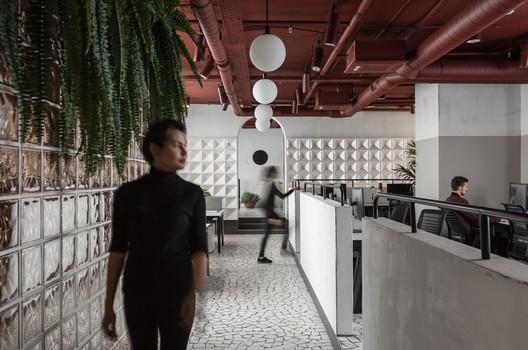