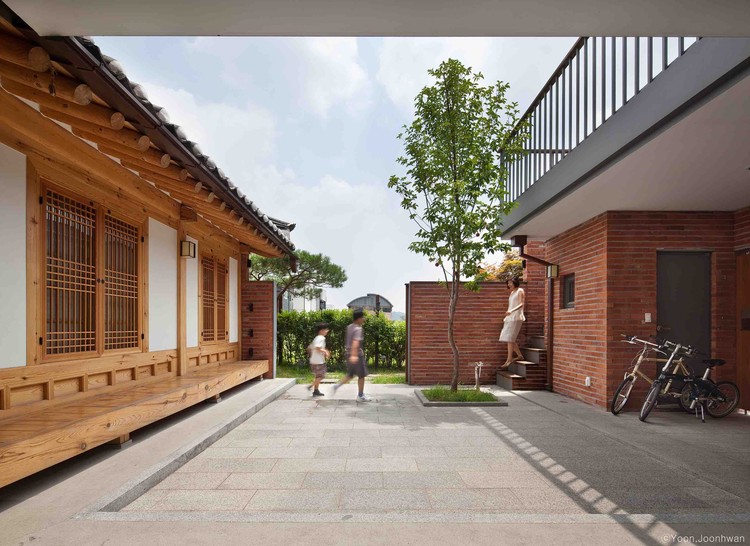 Text description provided by the architects. This contemporary red brick house embraces Hanok, a traditional Korean architecture, for a family with two children near Seoul. Clients had specific demands for their own house that it should have a restful space for them and a spacious home for their children.

A fifth of the population of the entire country now resides in the capital. As a response to the growing demand, it has been inevitable to build tall apartments with less consideration on design to speed up the whole process. Correspondingly, it became the most popular type of living. However, there are also shortages. “Clients told us that they could hardly feel at home in their house. Apartment blocks are famous for noise issues between the floors.” Architect continued “Accordingly, activities are highly limited” The identical design and restrained lifestyle now make many inhabitants to find an alternative way to dwell in the city.

Embedding Hanok into a contemporary building was a big challenge for the architect. “There were two requests. Firstly, a part of the house should be Hanok. Secondly, it should have Madang, Korean garden, facing south” The contrast between the Hanok part and the contemporary part seems to be prominent. Balancing these two different construction methods was the main concern in this project. “Madang is like a buffer zone to dilute any possible disconnection” said architect. Madang also naturally blends into the living room through the large windows. It functions like a big playground for the children where they can run around all day. This playful moment continues to upstairs where the small library and the study room can be found.

The three big volumes of Hamyangjae was the manoeuvre to enclose Madang. The architect had to seek an alternative solution that could keep Madang private since having fences is not allowed in the neighbourhood.

As a result, the entrance is enlarged that has a terrace on the top and a storage below. The three masses of Hamyangjae makes every side of the building distinctive. From the outside of the entrance, Hanok completely disappears. On the other side, the whole mass splits into three volumes and gives a hint of Hanok. “Hanok unit can be completely detached from the red brick part without any damage” explained the architect.

Bay window: The bay window was carefully chosen in order to fit with the whole conceptual design. Apart from bringing a strong visual connection, the bay window is able to open from the center to the extremity, allowing a strong physical continuity from the inside to the outside Madang.

Traditional design system windows: Windows are important elements in the traditional korean architecture. First, they allow the light to enter in the house while giving a strong privacy to the habitants. Secondly, the type of pattern are related to the inside program and also symbolic to the status of the habitants. Finally, it is also an important factor of the inside atmosphere. In this project the use of a modern system window allowed the project to keep those traditional qualities but also to have a good isolation and ease of use.

Wooden floor: Wooden floor is usually need to in the Hanok to symbolize the meeting spaces. The use of the precious material give some importance to those space that we used to call Maru. It is also used to differentiate the meeting space from the individual room called Bang. In this way a Hanok can be seen as an alternating of Maru and Bang. The Maru can also be seen as a threshold which connect the inside space between themselves and also the inside spaces with the outdoor spaces. In this project, the whole Hanok is covered with a modern wooden floor in order to take advantage of the floor heating system which is not compatible with the traditional one.

Granite stone: Granite stone is an important element in the traditional Hanok. They are used for the foundation of the project Gidan and also the wooden columns are standing on a strong piece of stone called Choseok. In this project, in order to fit with the modern life style, we decided to extend the granite stone as the ground material for the whole Madang Korean courtyard. Compared to the originally soil covered Madang, the stone pavement allows the children to play in a clean environment but also multiply the programmatic possibilities. The living room rather than covered with a wooden floor is covered with a stone pavement which highlight the continuity between the Madang to the inside space.

Hanji paper wall: Hanji paper are used in order to create a limit between spaces. It separate in a subtle way the spaces between them. Those frameless elements, when they are closed, give the feeling that the wall is unified. In the other hand, when opened, they give the feeling that 2 connected spaces look like a unique space. Finally, the slight transparency of the Hanji give an impressive and harmonious atmosphere to the space.