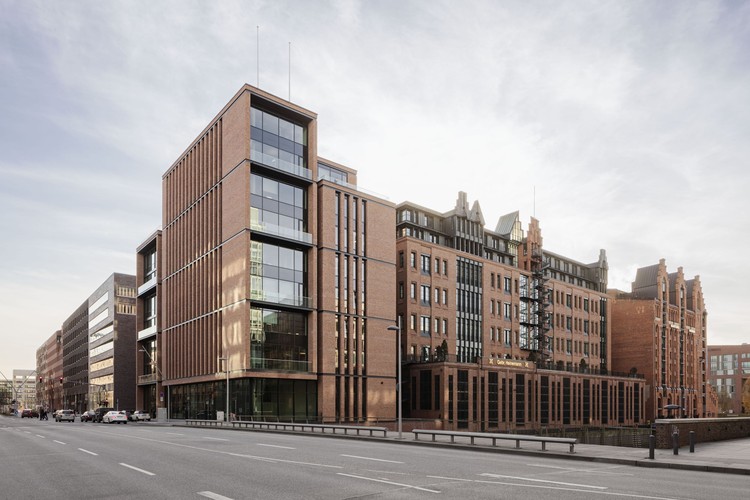 Text description provided by the architects. The extension to the head office of the Gebr. Heinemann trading firm in Hamburg’s HafenCity has been completed to a design by von Gerkan, Marg and Partners (gmp). gmp had won the competition in 2013 and, one year later, started with the construction of the office complex in Hamburg’s Elbquartier; the development blends well with its surroundings in terms of aesthetics and shape.

This third building tract is part of an ensemble dating from the 19th, 20th, and 21st centuries, and is a distinctive element of the city – in front of the HafenCity backdrop, on a site area of 1,286 square meters, the extension building adds to the headquarters of Gebr. Heinemann with its two existing buildings between Magdeburger Hafen and Shanghaiallee. The new building with its first floor and gallery stories, as well as eight further office stories and two underground parking garage levels, has been designed to meet the requirements of the Gold standard of "Sustainable construction in HafenCity".

The building at Koreastrasse 5 is notable for its location at the water’s edge. The external wall of the building to the north also forms the wall of the Fleet canal, and towers 42 meters above it. The connection with this maritime part of Hamburg is based on the company’s history; Gebr. Heinemann is a traditional company that was founded at this location as a ship’s chandler in 1879. The extension building makes reference to the cosmopolitan attitude of the internationally active Hanseatic trading house; located directly next to the Heinemann-Speicher, the building blends well with its surroundings, given its brick and glass facade that is typical of the location, the vertically structured facade relief, and the vertical fenestration arrangement across stories. The new building also references the Maritime Museum that borders the company site to the west in terms of aesthetics and shape, thus mirroring the traditional stability of the quarter.

Elements such as the historic loading openings of the storage buildings are reinterpreted with large glazed areas. With its timeless design and its exciting building volume, the structure with its generous terraced flat roofs creates balance between the different eaves levels of the neighboring buildings. The new and yet independently usable tract is connected with the flanking company headquarters via a glazed connection. Distribution in the building is via a central circulation core. The offices have been arranged around an inner central zone which accommodates shared rooms, such as sanitary facilities. The transparently designed first floor serves as the staff entrance and houses the Gebr. Heinemann Museum, as well as retail premises. In accordance with the client’s wishes, the layout design on the upper floors has been devised to allow maximum flexibility. This makes it possible to divide the space into both open-plan and cellular offices. 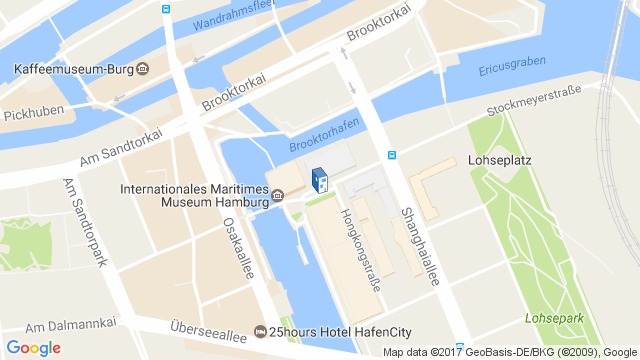