Save
Bunker Hill: The Memories of LA's Lost Neighborhood
Share
Or
Copy

The "living memories" of Los Angeles are seen and sensed in the way that space is occupied in the city; the traces left behind by what has been. "Lost Hills," a short documentary by LA-based television station KCET, is a snapshot of LA’s lost neighborhood, Bunker Hill, that in 1955 was approved for “slum clearance.” As a result, the entire area was removed almost without a trace - Angels Flight, a funicular railway that transported residents from Bunker Hill to the city center, is the only remaining structure after reopening half a block away from its original location in 1996.

Bunker Hill was originally an area inhabited by upper-middle class people, but that changed in the 20th Century when those people began to move away. This made it somewhat easier for LA to erase the history of the Hill in order to make way for functionality, following late 20th Century modernist thinking. Illustrating how space is so strongly tied to memory and emotion, the video depicts what one interviewee calls an “absence [that] makes a presence”; the city is the materialization of memory, partial and partly erased. 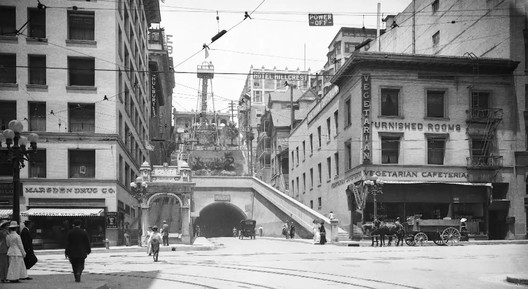