Text description provided by the architects. The country shop is located in the village entrance. The program tried to restore the traditional Chinese "village entrace" space by converting an old house into a public space, hoping to use some traditional arrangements and construction methods to reshape the publicity of the village. In the traditional villages, the entrance was the division of country and nature, which undertook functions of signs , separation, traffic organization, leisuring and gathering.

Usually the village entrance should have a big tree, a pavilion, a square and a temple, only in this way can be said to be a complete village. A small house passed through by village roads was called Road Pavilion, set for the villagers and passers-by to have a rest. Most of these buildings were owned by village clan organizations, built by the villagers raised funds or donated by the individuals. In some places the village entrace was a square, not only served as the identification of roads, the calculation of the foot of the reference, but also served as a market at a specific time, supplying tea, summer medicine or straw sandals.

The design attempted to restore the publicity of the village entrance, and regarded it as a part of the reconstruction of rural cultural life. The original village building was an ordinary three-bay house, 11 meters wide, 7 meters deep. According to the orginal site, we built a 6 m x4.8 m public gallery for villagers and past visitors to rest and communicate in the outside combined with the village landscape plaza and trees. We chose the traditional Chinese wood structure as roof frame, hoping to make the form back to the traditional local character, reflecting the construction of the local system. The design also refered to public buildings in the Wannan and Wuyuan villages, such as pavilions, bridges, etc.

These rural construction types had been widespreaded in the past Jiangnan villages. Thanks to Traffic inconvenience and other reasons, , these rural buildings were retained in southern Anhui such as Wuyuan village.The basic form could be understood as the Jiangnan village in the past in general. After style selection, modern design improvements were added to make the structure more reasonable. Outdoor corridors extended into the interior, indoor and outdoor structures were the same. Today local managers in Nanjing have participated in the village shop. In the weekdays traditional agricultural products will be sold and in display and in the weekends it will be a rural market in combination with the village's entrance square for villagers and tourists buying and selling goods. 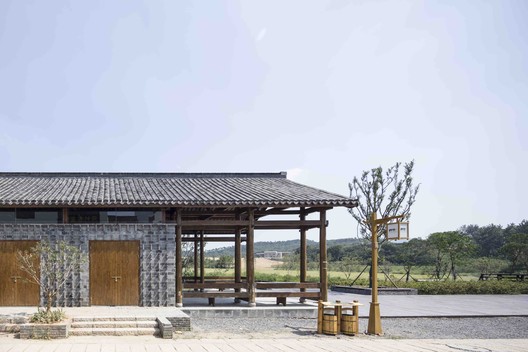