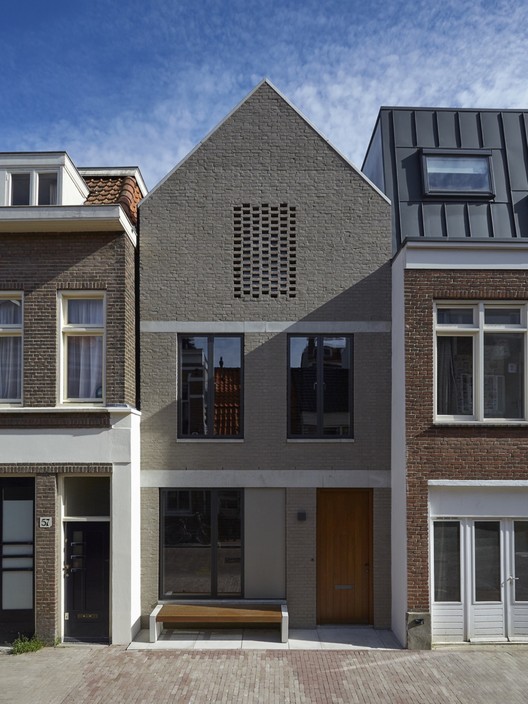 This eclectic quality of the street stems from its colourful past when the area was in use as the city’s builders yard. A wide canal at the end of the street was used to bring materials into the city on large barges from the surrounding countryside and seaports, which were then offloaded and stored in large warehouses. Plots of land were divided up along the polder where the tradesmen gradually built workshops with their living accommodation above, giving a distinctive character to the street of non-uniform buildings built of relatively modest materials.

31/44’s design for the new house celebrates this quality whilst referencing the townhouse typology widely seen in the city centre, a reflection of the neighbourhood becoming more ‘upscale’ as this area of Amsterdam adopts some of the formality of the historic centre. The practice underwent extensive negotiations with the local authority to ensure an appropriate design solution in keeping with the changing neighbourhood was achieved.

The street elevation features a brick facade and pitched gable profile which was partly guided by council requirements. Bands of structural concrete and large window openings reference facade details from local workshops. In contrast, the rear is clad in simple utilitarian sheets of Equitone panels.

The brickwork on the north facing street facade is laid in a Flemish bond to make the surface as textured as possible. The facade receives the sun only at the start and end of the day when the oblique angle of the sun brings the surface to life. A bench in front of the house is conceived as a shared amenity for the street, which has a lively sociable community that frequently takes over the road during summer evenings.

Internally, the 145 sq m house maximises all available space with rooms beyond the entrance spanning the full width of the plot. A void, with a large rooflight above, runs from the roof to the ground floor to bring natural light into the centre of the plan at all levels.

A split-level ground floor with a lower ground floor creates a spacious kitchen/living
room with full width glazed panels that open onto the rear garden. The living spaces at  both ground and first floor feature exposed timber structure to add depth, character and material warmth in the areas where the family spend most of their time.

Bespoke units constructed from black and grey MDF and birch-faced plywood feature throughout the house. A built-in bench around the fireplace allows you to sit close to the fire whilst looking out at the garden. Constructed from precast concrete panels, the fireplace features a suspended steel flue that is left boldly exposed on the rear elevation – a quiet reference to the light-industrial heritage of the area. 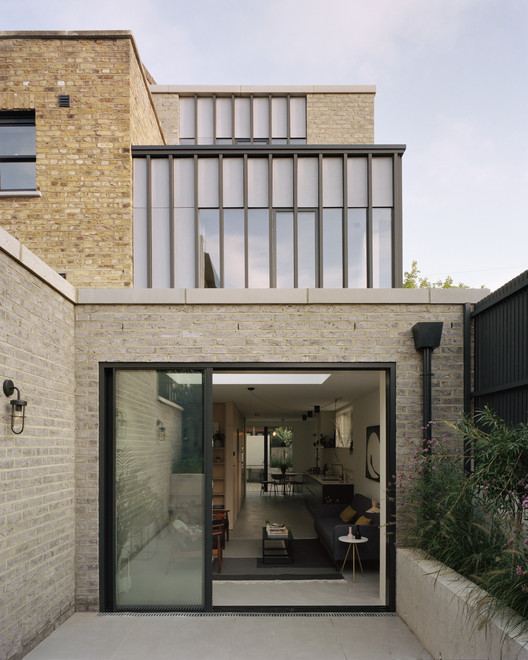