Text description provided by the architects. The client came to visit in the situation when the existing Korean traditional house should be partially demolished as it become an obstacle to the planned construction of a double-track railroad from Seoul to Gangneung, which is preparing for 2018 Pyeong Chang Winter Olympics. We had to impartially consider the ideas of three generations of the client family: the grandmother and the father could not discard the love of the sixty-year-old Korean traditional house, while the young son wanted to shake off the old lifestyle that was quite bothersome so far. Taking into account their ideas, we began to enjoy imagination by sitting together with the family on the side wooden floor.

Preservation / Link / Topography
In Bongyangjae House, three words are used as architectural terms: first, preservation, to relocate and refabricate the Korean traditional house at a crisis of demolition, thus protecting and cherishing its bygone memories; second, link, as a house that connects and mediates the three generations, completed by wooden assemblies of linkage between the Korean traditional and the Western-style parts; and finally, topography, of the rising landscape that can be seen in the Korean tradition of real landscape painting, to project its image that can reflect its locational background, Daegwallyeong, and pursue harmony with pine trees.

The Plan that Combines Three Generations
We made the existing Korean traditional house disintegrated and relocated to preserve the space for the grandmother and the father as well as creating a new space for the son. The Buildings are laid out in a way of unfolding its floor plan southward within the site and the almost 100-year-old Geumgang pine tree was preserved fortunately despite the new construction works of a double-track fast train nearby. In order to avoid the noise from the right side which the fast train would pass, we relocated the existing Korean traditional house to the left side while designing the western-style house as a reinforced concrete structure and putting a loft above as a buffer space.

Amongst the four space in the main body of the existing structure, one is assigned to the grandmother; another to the father; yet another to the common space; and the right one is used only to provide its component because it could hardly reassemble its loft above the kitchen. Designing the common space, which connects between the new western-style and the Korean traditional wings, as a wooden structure which can be fabricated, we made the flow naturally lead through the vestibule to the Korean-style wing, whose left space was topped with a hipped-and-gable roof while its vestibule and the right space were topped with a gable roof. In son's place, children room was put in connection with the toilet corridor so that the son would have his own family there in future; and the living room and the kitchen were located to the south. We also made a roof balcony that would serve as a family lounge to which one could go through the loft.

Product Description.
The main materials of BongYangJae are pine tree and concrete. The structure of Korean Traditional building "Han-ok" is consistent with timber wood made by local pine trees. Therefore relocated part of BonYangJae is mostly made of local pine trees.

While we refabricate previous house, existing timber is reused after process and damaged part is replaced by newly processed timber of pine tree.- 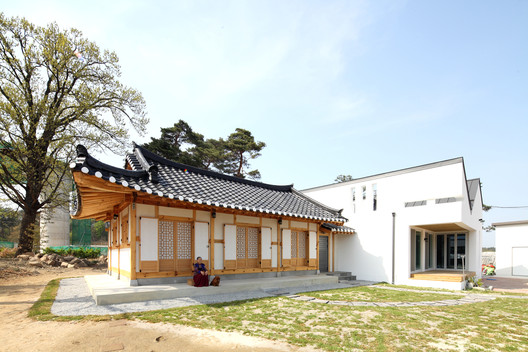