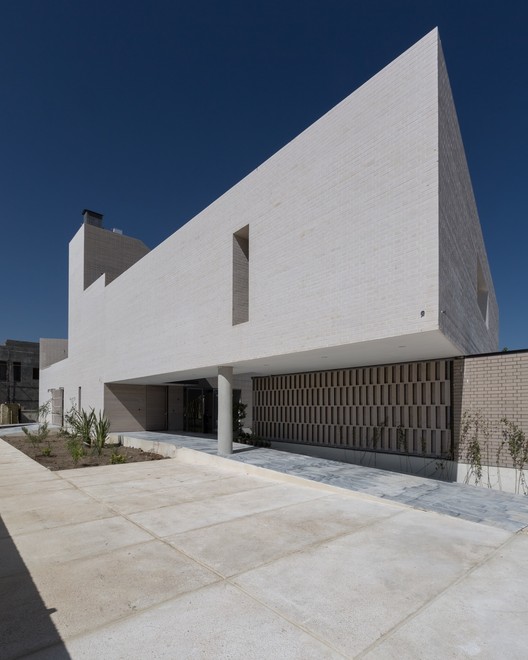 [In]Exterior is an exercise in challenging the well-established conventions of designing for a second home or a retreat family house.

Conventionally speaking, retreat homes are conceptualized as villas in the park with a focus on maximizing the visual access of the interiors to the surrounding natural vista through transparent exterior thresholds of a solid volume.

[In]Exterior is a family house located in a retreat village in the periphery of City of Isfahan. The suburban context of the project offers no substantial natural view or meaningful topographic variation. Hence, the spatial organization of the project is fundamentally transformed to introduce two connected semi-courtyards. Instead of looking outward at a non existing natural vista or impressive view, the project is shifting its visual focus to the inner yards, arriving at maximum transparency of the architectural thresholds where the interior spaces meet the interiorized yards.

The spatial uncertainty in identifying the borderline between in and out is further established through the introduction of sliding walls that transforms the interior yards of the project to semi-open gardens.

Meanwhile,  the introduction of the yards within the heart of the spatial organization of the house, allows for performative division of the house between the categorically different  functions with private and public nature.

Product Description: For the facade of the building we decided to go for a white modular material to emphasize on the abstractness of the platonic forms of the project. Hence, the white industrially produced bricks of Namachin Esfahan were chosen.