Earlier this year, Prime Minister Algirdas Butkevičius of Lithuania announced three winners and five runners-up of the Science Island international design contest. The competition drew 144 entries from 44 countries, and among the three winners selected by the international competition jury, Kaunas City Municipality will choose one to realize their proposal, which is scheduled to open in 2018.

Given the competition's high profile, ArchDaily has received a number of additional entries to the contest showing alternative possibilities for the site. Read on to learn about four of these entries from WAH Studio, Andrew Burns Architects, TheeAe Limited, and FARA-ON Union.

From the architects. The Science Island museum is space to experience knowledge, building as a void, the mass becomes the outline, the skin holds the enclosure, the inner space where the simulations of climates and contexts, the supporting function becomes the columns of the void, like space, time machine, from the outside nothing more than sculpture in that unique garden, trying not to erase or change its roots and movements, allowing new ones to appear by its walkers around sculpture.

From the architects. The exterior is a form with two presences, both a building and a landscape, enriching and preserving the landscape of Nemunas Island in full. The southern face of the building is organic, responding to the undulating geometries of the river. The northern face is rectilinear, resonating with the urban pattern of the city center. The building synthesizes the geometries of nature and machine.

From the architects. With such a diverse set of young minds, thinkers, and creators around, the new Cultural and Science Center Building on the Science Island will act as the catalyst for the development of new ideas, philosophies, and ideologies. Along with this notion of regional needs for the new center, the provided island for the new building has its vast open nature to embrace the new idea to be part of its nature ground. Our main concern has been decisively driven to locate the new building into the center of the island to ease the approaches for people from both the south and the north region.

From the architects. The design of the Kaunas Science and Innovation Centre is based on the idea of the implementation of two fundamental factors of the physical environment. The physical environment highly focused on the knowledge of science and technology as the main bearer of human activity which comes into contact with the physical environment created by nature. We perceive this visual and architectural contact as an expression based on the utmost harmony of both factors which are capable of not competing with one another but working together and creating future opportunities for themselves and their environment. On the one hand, the innovative building of a science center taking over a landmark, a symbol of the specific area, preserving the character of a green island as a place for relaxation and recreation. This relationship is based on the intersection of both factors.

You can also view the five honorable mentions via the website of competition organizer Malcolm Reading Consultants here. 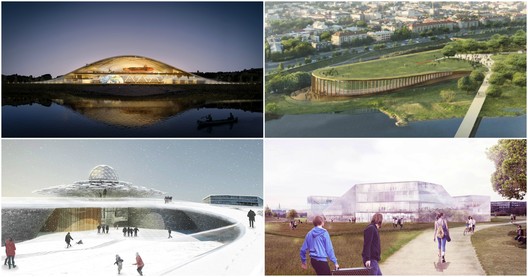