Today China inaugurated the world's highest bridge, opening the new crossing to traffic after the structure was completed in September, reports China Central Television (CCTV). Crossing the Nizhu river canyon at 565 meters above water level the Beipanjiang bridge spans 1,341 meters to connect the provinces of Yunnan and Guizhou in the Southwest of the country. The 4-lane bridge is part of a network of new highways around Yunnan and Guizhou that allow access across rugged terrain that was previously largely inaccessible.

Costing around 1 billion yuan (US$144 million), construction of the bridge began in 2013, and had to be carefully designed to deal with the extreme wind conditions caused by the Beipanjiang Valley. "Where to place the bridge piers was a problem," explained Liu Bo, deputy chief engineer of CCCC Highway Consultants, to CCTV. "The gorge here is over 500 meters deep, so how are we going to design the structure of the bridge to deal with the strong wind field problem?''

In recent years, China has become a hot-spot for record-breaking bridges. The mountainous terrain in the western regions of the country has recently given rise to the world's longest and highest glass-bottomed bridge, the world's first all-glass suspension bridge, and the world's longest glass skywalk, all of which enable tourists to take in the dramatic landscape. 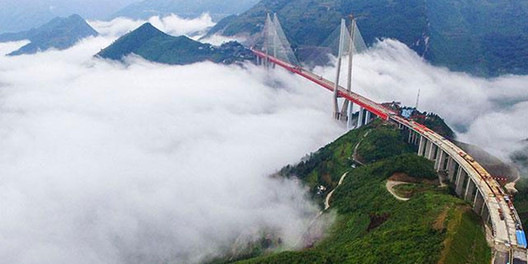