Morphosis Architects’ Hanking Center Tower in Shenzhen, China has recently topped out, with the 62nd floor now in place. Defined by its detached core configuration, the building positions its primary core 9 meters outside its main body, connected by a series of sky bridges and braces, in order to increase flexibility and light penetration into the floor plate.

Two secondary cores in the body of the building provide structural reinforcement and house private elevators for VIP users, as well as freight elevators and mechanical services.

In an effort to serve global professionals and bring density to the suburb of Nanshan, the tower will feature flexible office space on its open floor plate, anchored by high-end retail and dining. 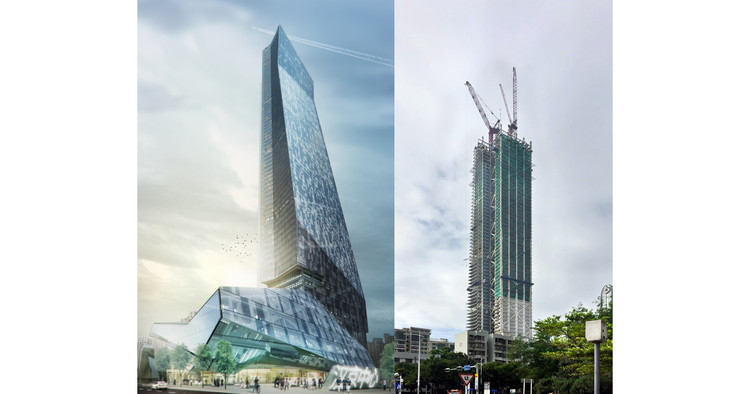 The Center utilizes folded angles to elegantly merge public components in the podium with private commercial space in the tower, a departure from conventional towers, where differing program is often regulated to separate and disjointed volumes, explained the architects.

Moreover, the separation of the core from the main portion of the building will allow for “a public to private gradient of activity on each floorplate, as tenants move from circulation and social spaces around the core to quitter perimeter offices with panoramic views.”

At the ground level, a grand plaza and “dimensional hardscape” will support public activity. Similarly, glazed lobbies and sky gardens will be located throughout the building, with one for every five floors, in order to create communal hubs for tenants. 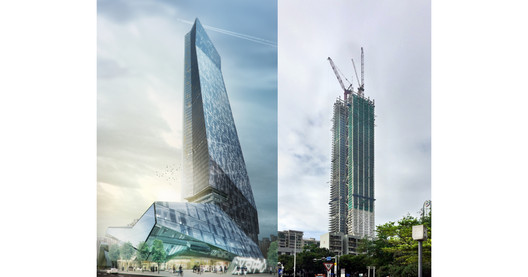