One structure in Waterloopbos, a collection of test models each no longer serving their original function, is the Delta Flume – a structure used to artificially form enormous "full-scale" waves to test the strength of the Delta Works projects. By excavating the sand plateau around the flume, RAAAF intend to reveal "a gigantic 'Delta Work'" 7 meters high and 250 meters long, surrounded by water. In their words: "Massive concrete slabs [will be] cut out of the 80 centimeter-thick walls and turned 90 degrees around on their axis." The 'room' thereby created offers an intense spatial experience of contrasting light, shadow, reflection – and views through the Waterloopbos itself. "Over the years," the designers state, "the slabs will be colonized by nature. The space [will] change throughout the day, the seasons, and over the years."

Deltawerk 1:1 has been commissioned by the Natuurmonumenten & Dutch Cultural Heritage Agency and conceptualized by Erick de Lyon, Ronald Rietveld and David Habets. It is set to be realized in 2017. 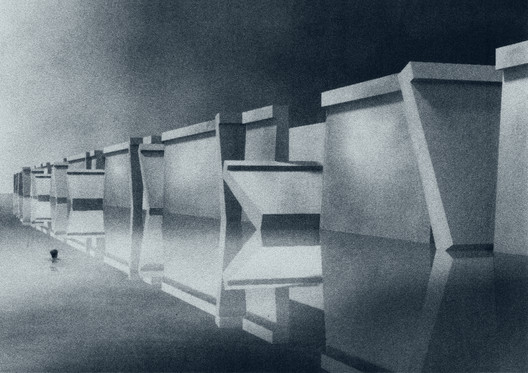