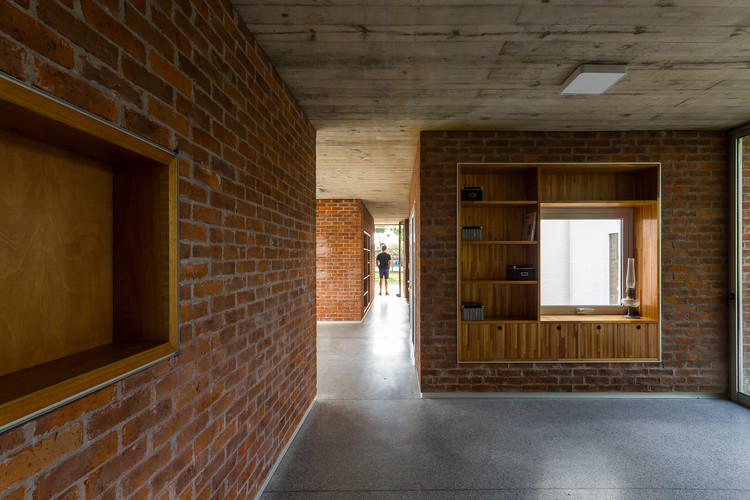 Text description provided by the architects. In a long building lot, the house is conceived as an answer to that and follows that proportion. The width - almost half the width of the terrain - turns the sides into areas of opportunity, so the more pronounced projections of the interior space occur in directions perpendicular to the parcel.

The social area of the home is defined as a “thorn” that is gaining privacy as one moves from the front to the back. This area is structured when it's combine with the volumes that harbor more contained and / or private activities. Once the social area is segmented, a succession of subtle diagonal visual connections are created and show how the spaces interconnect each other and at the same time, the projections-expansions to the outside are settle.

The projections are accompanied by pavements that are defined according to the adjacent program inside the house and the kind of the activity that could be carried out in this one. The pavements characterize the outer space and generate diferent areas that favor the interaction between themselves and the virgin portions of the terrain.

The space-material logic that defines these expansions is the interaction of each space with one of the massive volumes to its back and a closing of curtain wall forward, which accentuates the flow towards the sides. Other types of spatial sequences appear when these volumes are perforated and allow visuals that cross transversally.

The contest proposal show some ambiguities that were the subject of revision in the adjustment process.

In this sense we understood that the project could take, among others, two well-differentiated courses. In the first one the boxes adopte an ethereal character being materialized with the minimal thicknesses and their presence doesen't give evidence of permanent elements. The other way was completely opposite: increase the mass, this was the one we chose.

Now the boxes would be anchored to the floor, they would emerge from it. Accordingly, the roof is pulled up and rests on the boxes, since at the beginning it was an element that was between them. The boxes became carriers and the pillar and beam structure proposed in the competition was abandoned. We noticed that in that gesture we could make the façades the very image of the structure, as elemental as a dolmen. From here came the decision of build the walls with rustic bricks.

The social space of the house is defined by three elements: the volumes of brick that came from the floor; The concrete roof which massive character go with the idea of giving shelter; The floor of gray monolithic and concrete that flows between the volumes and that confer the house a strong relation with the exterior. The private, service and annex areas were distributed in the different boxes, the white color of the interior of them maximizes the illumination capture through the square windows while intensify the passage of space-between to space-within. 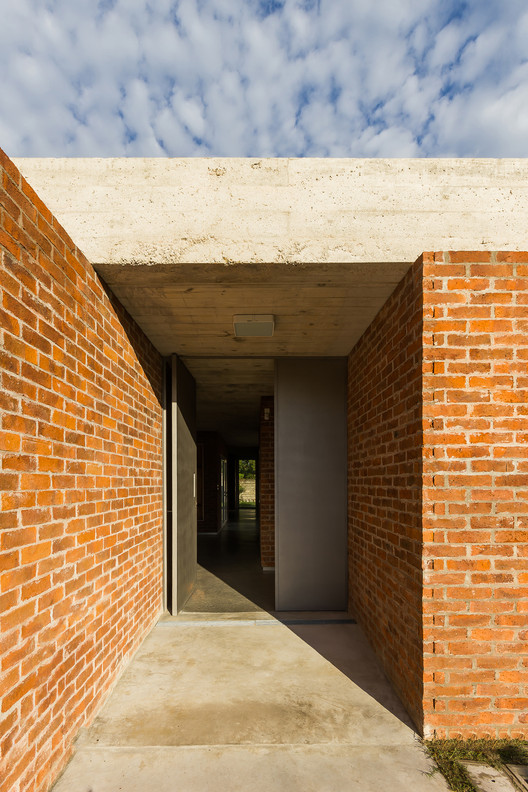 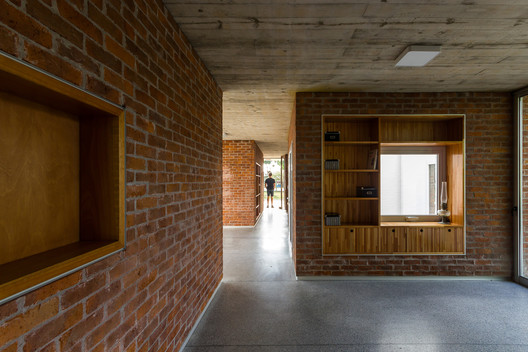