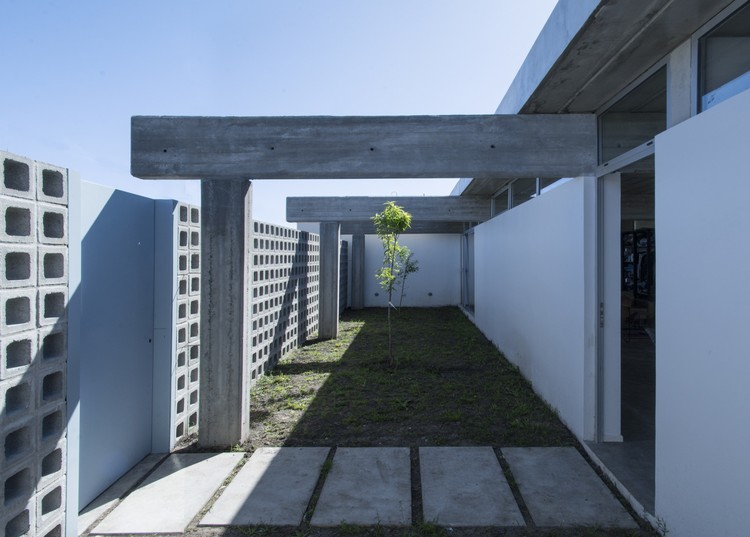 Structure stops hiding behind the drawing and comes out to participate as the main character of the play.

Based on the structure performance, everything occurs. The stage combines different but simple lines, materials, forms and senses.

Four concrete porticoes are set in the edges of the structure creating three real and imaginary longitudinal spaces.

In the front the access yard, where beams emerge. Inside the house, the scene develops in freedom, delimited by containing planes. Finally, at the end of the non-disturbing crossing beams the gallery appears as the last scenography.

The house is located in a small scale residential zone which is recently developed. This site is situated on a corner and is 14 x 30 meters, with a total of 402m2.

Project must adapt to a young couple needs. Thus the house was thought to be built in two different time stages: first, a studio apartment (fully functional nowadays) that will became the dining room in the future. Then bedrooms will be added in the front part of the plot.

The already built studio apartment was designed across the plot, keeping utilities package facing south; bathroom, kitchen and a small laundry space with independent access from the backyard.

Behind a permeable grid wall, the medium scale front yard was thought as a soft transition feeling between theoutside and the inside of the house.

Same goal was set for the gallery that merges the studio apartment with the green backyard. Besides, glass transparencies predominance contributes to soften even more the edges.

Chosen material were simple and austere. Bare concrete to highlight columns and beams structure that crosses the house from side to side.

Inside the house textures are aligned: polished cement floor cover, reinforced concrete kitchen counter and calcareous lining in the bath, kitchen and laundry.