The Hudson River Park Trust has revealed plans to transform the 800-foot-long Pier 26, located on the Hudson River in the New York neighborhood of TriBeCa. Currently vacant, the pier is set to receive a new park designed by landscape architects OLIN Studio and a maritime education center designed by Rafael Viñoly Architects.

As shown in renderings published by Tribeca Citizen, the new park will include multiple landscaped areas interspersed with more actively programmed areas featuring playgrounds, forum seating and what appears to be a giant hammock for relaxing over the water. Not shown in the renderings is Viñoly’s design for the estuarium at the park, which will likely be located at the beginning on the pier along the West side highway. The total project is estimated to cost $30 million.

Check out plans and additional renderings for the project at Tribeca Citizen, here. 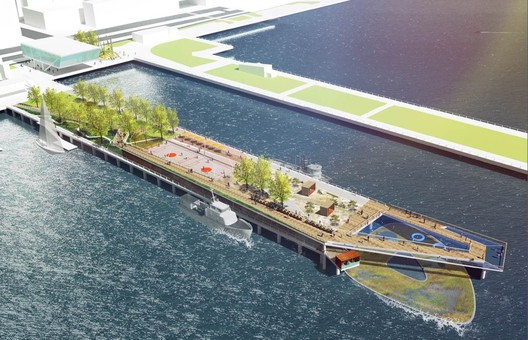