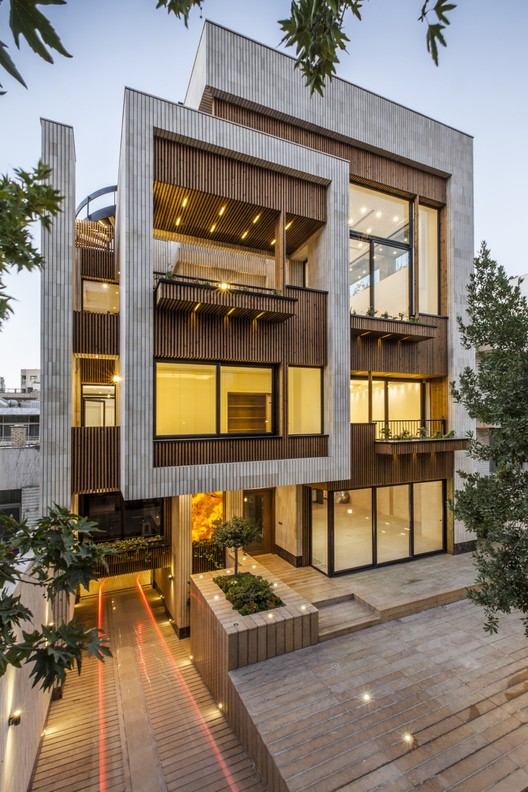 Text description provided by the architects. For those people who have a long experience of living in single-unit houses with a courtyard, it is a great challenge to change their life style and live in apartment houses.

Losing many of desirable advantages of single unit houses such as independency, fellowship with nature, existence of hierarchy and, natural ventilation and … is a trouble for the people who want to live apartment units.

And also in this project the client had decided to transform his single unit house into a triple unit apartment for himself and his two children.

In fact Mehrabad House is an effort to reduce the negative impacts of this transformation in peoples life style.

So in design career the following decisions were made:

-In the next step for having the maximum visual connection between this unit and its courtyard in roof area, we broke the saloon’s roof in to two parts with different height. So we gained better ventilation and lightening condition and a desirable visual connection.

-Creating an open space in north side of building as a patio beside the family room and creating a green wall inside it in order to making the sense of freshness and having natural ventilation inside.

-As old fatherhood house had a semi-open and very useful space called AIVAN(a Persian word) beside the main hall, we tried to create an equivalent for it in new fatherhood house in north side of building.

- Trying to creating suitable spaces as a reply to privacy need of people.

-Creating some green spaces with plants in different levels of building, in order to running away from spiritless sense of living in an apartment.

- making some places in building’s façade for plants growth and using material like wood and brick (as we believe that they are breathing all the time) to make the building alive.

Product Description. Brick is one of the main materials used in this project. And it is because of the historical background of the project’s city that logically leads the architect’s mind toward vernacular materials in order to harmonize the project with its context.