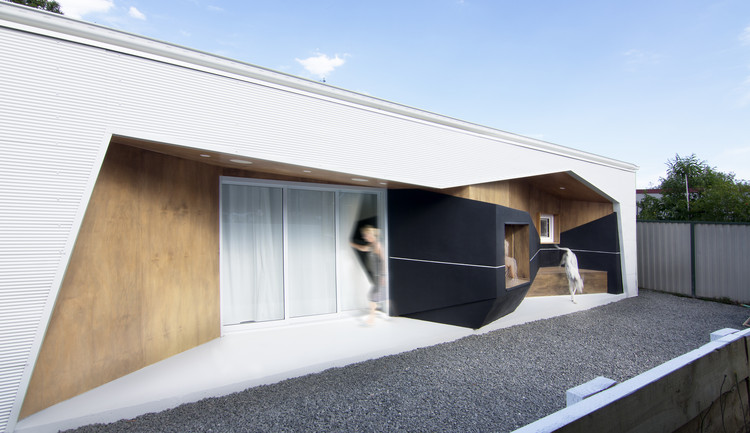 Text description provided by the architects. The project is sited in a typical suburban setting 20km South-West of Sydney’s CBD. The client wanted an additional house toward the back of an existing residential dwelling. As part of the brief, we had to incorporate a full kitchen, laundry, bath, bedroom, home office, audio studio, work studio and an open living/dining area. The placement of the new dwelling was between two rear yards and a townhouse. We wanted to be able to have some form of connection with the existing yard and to also utilise the northern sun. We were able to incorporate a courtyard to the front of the new dwelling and also apply a large glazing area to the northern side of the project which would allow the sun to penetrate the main living area.

The concept of the project began with taking a ‘block’ and then manipulating it into its setting by way of positive and negative protrusions. The use of the colour black added another layer to the project and was used to represent program and function. This enabled us to create an interesting space and blur the line between floor, wall and ceiling. We wanted to give the effect of having the black materials ‘projected’ on to different surfaces and creating a motion throughout the building.

The façade’s movement begins with a deep extrusion that acts as the main entrance and opening to the courtyard whilst also providing shade from the afternoon sun. This motion then protrudes out allowing for a day bed on the opposite side and then moves back in to provide an exterior seating solution.

The layout of the dwelling was to have the main living area open up to the courtyard and have the kitchen overlook this area and the other programs branch off a central hallway from this space. The two studio work spaces are disconnected from the main areas as per the clients’ request, in which they wanted to establish separate work and home areas.

The construction of the house was also to be thermally efficient, this was achieved primarily through the use of materials. The construction features two layers of insulation, glass wool and styroboard EPS and the Lysaght Colorbond steel provides a highly reflective surface. The deep eave at the front of the façade eliminates the afternoon sun and the uPVC double glazed windows give good thermal properties.

Overall the project creates a distinguishable contrast in its environment creating an almost sculptured object that has been cut through and opens up to its programmatic requirements. The façade’s push/pull motion was achieved and strengthened through contrast and informed by program and function and creates an exciting motion throughout the project.

Product Description. The Lysaght exterior paneling allowed us to create the sharp motion of the façade against a monotonous ‘block’. The concept of the project was to have a minimal exterior that has been cut open showing the textured and warm feel of wood whilst allowing for a stark contrast of the black elements which reflect program and function. The choice of steel as the exterior skin also provides a contemporary feel to the project and adds a high level of reflection from the sun allowing for a higher thermal comfort level for the user. 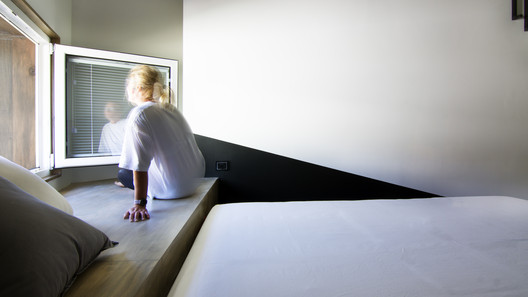 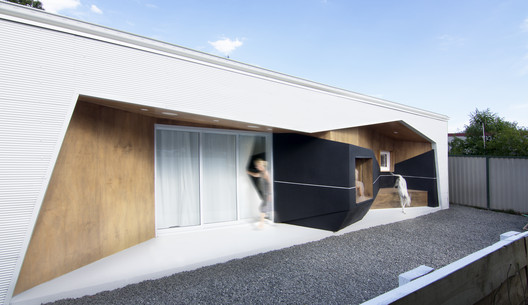