Text description provided by the architects. CAZA (Carlos Arnaiz Architects), a Brooklyn-based architecture and design firm with offices in Bogotá, Colombia; Lima, Peru; and Manila, Philippines, is pleased to announce the opening of the City Center Tower located in downtown metro Manila. With construction completed this month, the 27-story-tall mixed-use building will feature three floors of commercial retail and dining space while also serving as the corporate offices for several prominent international companies.

CAZA’s design sought to defy the average core and shell design of standard corporate office buildings by introducing refreshingly unexpected geometries that produce new experiences for users. By infusing a series of concentric circles extended across the horizontal axes of each floor, the tower’s exterior façade marries the structured shape of a cube with the free-form organic pattern of a wave. The resulting visual impact elicits efficiency and innovation while retaining a sense of light playfulness.

“In the last fifteen years, office development in the Philippines has experienced an unthinkable explosion due to the arrival of the BPO industry,” remarks Carlos Arnaiz, Principal and Founder of CAZA Architects. “As architects, we are searching for an expression of this new sociocultural paradigm. The City Center Tower could be one of the first projects in the Philippines that represents the changing nature of the workplace, where nature and offices interact in this 24-hour cycle—accentuating the reality of how the BPO office environment operates.”

Visitors are welcomed to the tower by an airy and illuminated double-height lobby that is circumscribed by two floors of commercial retail space, establishing the tower as a vivacious center that is both accessible and enlivened by public activity. Hovering above these retail sections are spacious elevated parking areas that align with a functional cooling tower, designed to accommodate a passive cooling system that is responsive to the tropical heat of the Philippine metropolis. On the fifth floor, atop the retail zone and parking areas, the lofted rooftop restaurant overlooks the building’s adjacent park with an expansive balcony area that will feature an urban beach with a wading pool, hammocks, and lounge spaces.

Above the five stories of commercial space at the ground level are the corporate offices accommodating the building’s multinational tenants. Each floor of the upper-level corporate zone is designed with a concentric circular pattern, layering together to compose the exterior’s iconic wave-like façade that distinguishes the unique tower. The circular patterning gradually forms a series of balconies and bulging metallic mullions that provide the office spaces—which are traditionally closed and inwardly-focused—with a lush green overgrowth that invites employees to look outwards towards the vista and orient themselves within the metropolitan yet verdant landscape of Manila.

Among the notable tenants of the new building are Wallace, an American human resources firm; Globe Telecom, the largest Philippine telecommunications syndicate; the inaugural Philippines-based office for Cardinal Health, an American healthcare company; and Google’s headquarters for the Philippines. 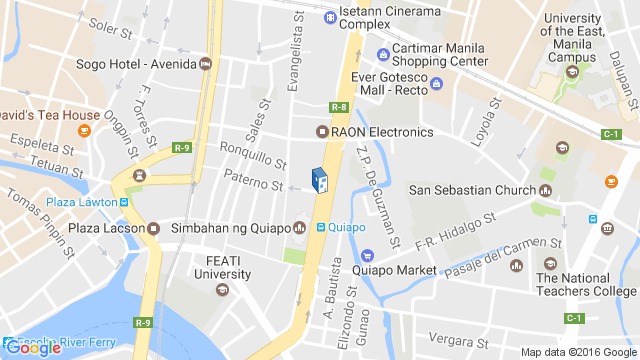 Location to be used only as a reference. It could indicate city/country but not exact address.
Share
Or
Copy
About this office
CAZA
Office
•••