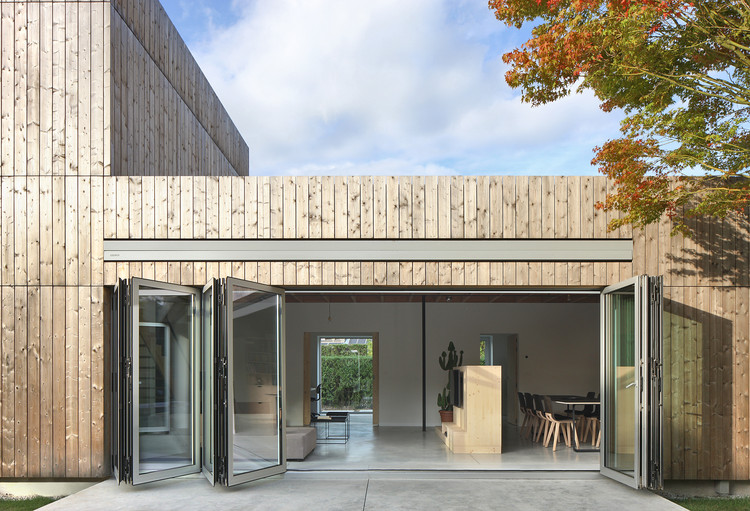 Text description provided by the architects. In this project a solitary sixties bungalow with a gentle sloped roof was refurbished and extended.

A new clear plan was distilled from the existing, with a maximum relation with the garden.

The existing rooms on the northern facade of the bungalow were adjusted in order to form a functional strip, serving as entrance hall, bathroom, storage rooms and a private office space. The living spaces were aligned in an open space along the southern facade, benefiting from large windows that give acces to morning and afternoon terraces and the garden. Two furniture elements divide the open space: a fireplace and a kitchen cabinet.

In the existing garage two compact children's bedrooms are fitted in, which open onto a playroom. On top of the bedrooms a volume is added with a master bedroom, a bathroom and a dressing. This crow's nest is reached through an open staircase in the living room.

A newly constructed flat roof, with visible wooden beams, gives rhythm to the interior space. The span is reduced by introducing a new central bearing line, by means of a steel profile, resting on two tender steel columns.

The bungalow is provided with an insulating shell, covered with a cladding of thermally modified timber. By preserving the existing isolated cavity wall, deep window bays are created, with windows reaching to the floor level. In the detailling of the cladding facade horizontal joints were introduced in a well-balanced composition.

Product Description. The thermowood cladding gives the facades a modern look, as the timber ages it becomes plain gray, which works very well in combination with the natural anodised aluminium profiles. 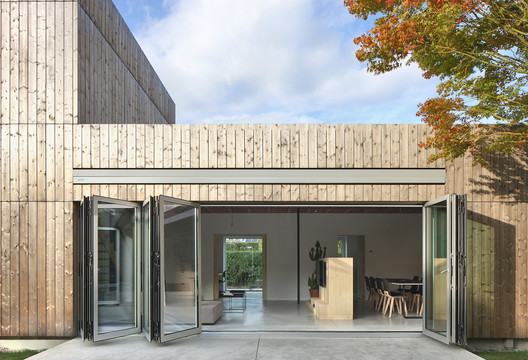