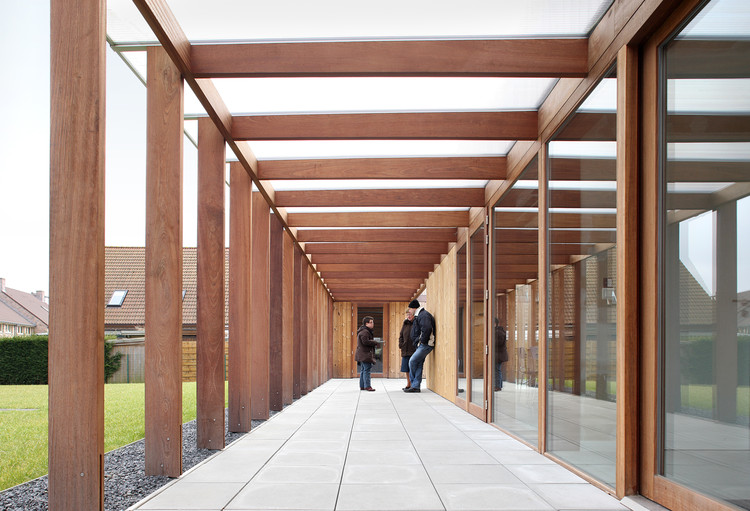 Since the establishment of the centre in 1987, Omega offers day care to people with mental disabilities. A trajectory was mapped out to expand the activities of the  centre. Omega acquired a building plot in between the railway and the Gentsesteenweg, a typical Flemish town acces road. In a first phase a rowhouse was extendend with several living groups, a multipurpose hall and an industrial kitchen. In a second phase a new workshop building was added, to replace the older temporary construction, and to house a music studio, a textile studio, a clay studio, a wood workshop, a sensory room. A third phase included the actual renovation of the rowhouse.

In 2005 urbain architectencollectief won the competition for a new workshop building. Through the introduction of a low and long volume and its smart one sided position against a blank wall, the project chose to preserve a maximum of open space. The studios were also designed with a strong focus on the garden.

The floor plan has a simple structure: in front, a carport houses the busses of the day care centre. In the juxtapostion of the workshops the guests are modelling clay, composing and playing music, assembling wooden furniture, painting, … The workshops are combined in pairs, with the insertion of a storage room, toilets and entrances. In the back, a small volume is cut off from the workshops by an open space. It houses the garden workshop.

The building is composed out of a prefabricated steel structure, enrobed with insulated wooden chipboard walls, and clad with wooden sidings. The rhythm of the steel porches defines the size of the different workshops. Inside the structural logic is on show: the corrugated steel roof, the wooden chipboard walls, concrete floors, steel columns and beams are left unfinished. High quality cupboards in birch multiplex and wooden windowframes offer a certain feeling of domesticity in return.

By designing the circulation as a covered gallery, the thermal boundary was shifted and the actualy built surface was reduced. The gallery is also a generous space in itself. Its comfortable width and light structure is inviting people to meet up, to stick around, to exhibit.

By opening the double fire escape doors, the workshops can be extended. The design seeks an honest and pure detailling of basic materials. The structure of the gallery is made up of wood. The roof is made of transparent polycarbonate sheets. The rigid rhythm of wooden columns and beams offers a strong spatial dynamic. Different points of view offer various experiences. The space of the gallery has in a short term earned a special place in the perception of guests and staff, as the building is referred to as ‘the gallery’.

Within this messy, banal, yet typical Flemish environment, the workshop building manages to introduce structure. It gives meaning to the place, starts up the dialogue with the previous extension.

Product Description. The search for an industrial feel inside the building, also led to a the introduction of a polished concrete flooring that is mostly used in large industrial halls.

Due to the postion of the new workshop building against a blank wall, skylux domes had to be introduced to let daylight into the workshops 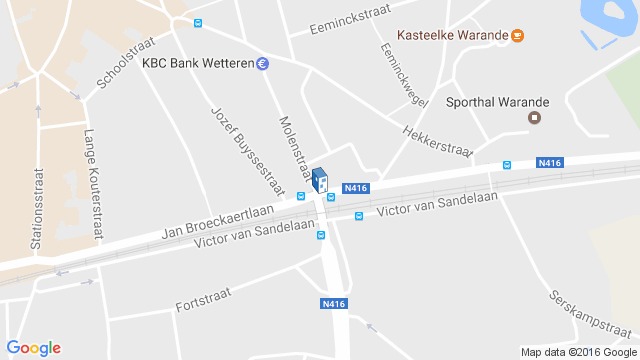 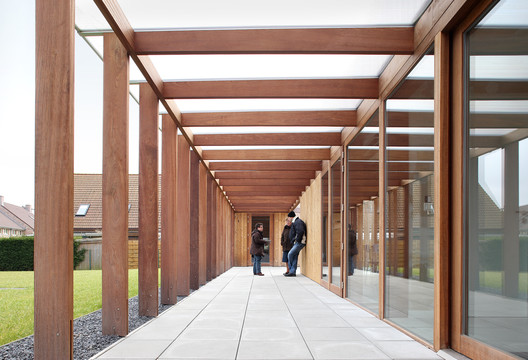