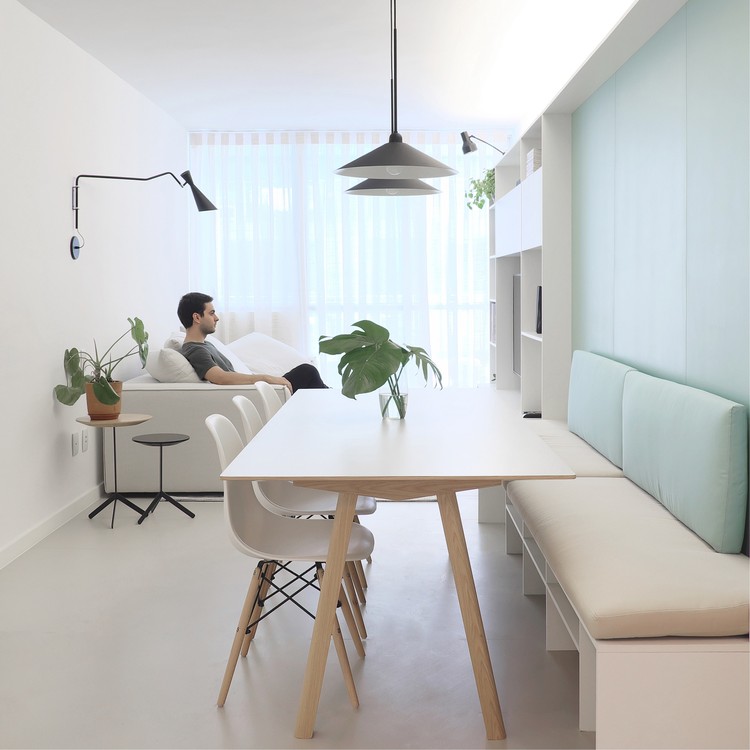 Text description provided by the architects. CI-AA practice made strategic interventions into this apartment interior to give the home a “young and dynamic character”.

The Rio de Janeiro-based studio took advantage of the existent narrowness condition and explore it through its renovation of Apartment in Niterói.

The original apartment configuration was quite clear: a long wall separating the sector of the rooms, from the social part and the kitchen. Our proposal for the renovation came from a basic premise: to explore the longitudinal axis of the apartment by creating a sequence of environments that allow us to subvert the original wall and to optimize spaces. The apartment issues prompted the project to focus on the following principles:

-Spatial and functional readaptation in order to optimize spaces;

-Concentration of infrastructures, equipment and storage into functional  shelf, in order to free up space;

-Selection of materials that reinforce the natural light of the overall spaces through the extensive use of white color in articulation with the color panels delimitating the different uses;

To maximize the functionality of the space a multifunctional shelf-wall was created inside the apartment. This intervention has the ability to define the spaces and to propose a new articulation of the two areas identified here - intimate and social. Thus, the intervention consists of the insertion of a large linear equipment that can completely transform the transition between the spaces. This transition before rigid and restrictive has become fluid and changeable, comprised of  color panels and moving furniture allowing the integration of all spaces. In addition, the multifunctional shelf works also as the infrastructure to the extent that serves as support for technical installations - electrical, data, illumination, and hydraulic. The design and performance of this equipment has been carefully crafted, demanding production drawings of all its components, which were then assembled as a set of modules inside the apartment.

The linear intervention was thought  to create a unique living space, the large functional shelf, with its 11.8 meters long,(which concentrate equipment, bookshelf, storage, cooking area etc.) works simultaneously as a design piece and as an operating interior infrastructure to support the diverse and multiple actions of the social space. Mutable in its usage conditions, it allows various interactions and different hierarchies between spaces.

Panels that open to reveal the WC and close to privatize the rooms, panels that open while cooking and close when the kitchen becomes an workspace, furniture that move to maximize social funcionality spaces according to the different moments. 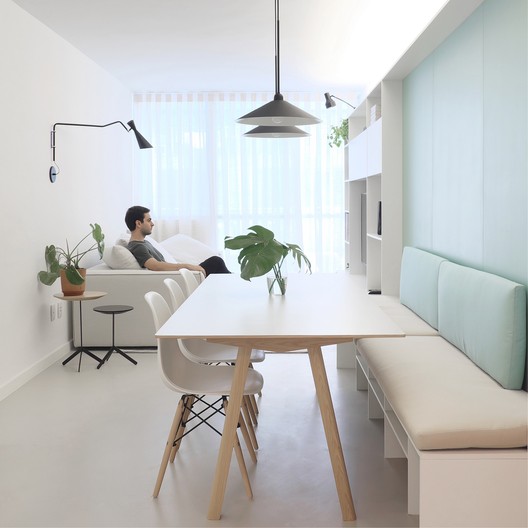