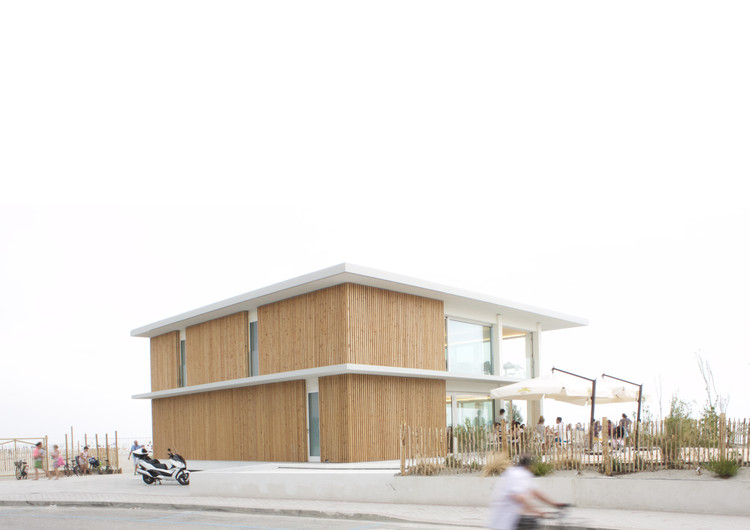 Text description provided by the architects. The design solution relative to the bathhouse and the open spaces around it is focused on the architectural requalification of the building, the typological reorganization and distribution of the bathing facilities and the reorganization of the open spaces with the inclusion of a swimming pool. In line with the policies promoted by the Shore Municipal Development Plan in force, the project addresses issues such as the reduction of the building area by 10%, the opening of views towards the sea, the use of light and precarious structures made from eco-compatible materials, the reduction of the impermeable surface.

The first step consists of the demolition of the cabins and of existing toilets and their reorganization into a new single element, located on the southern boundary of the lot, with development orthogonal to the coastline. This choice leads to a radical open- ness of the visual cone away from Ionian Sea Road to the coast and generate a strategic void between the main building Sagano and volume of services: an interesting area of transition between the street and the beach with a strong urban potential. This void is the protagonist of the design, intended as connective tissue between the different building services and an element capable of generating, through its morphology, a strong continuity with the dune system, reinterpreting its structure and spatiality.

It is imagined as a soft and sinuous surface, which topography, together with vegetative structure, alternates more private and protected areas to more open and permeable spaces. The edges, generated by the different levels of the surface, act as barriers and with the wind action participate in the natural formation of sand hills, which contribute to the union of the different levels between the surface and the beach.

On the main building Sagano the project proposes a global refurbishment, which is approached as an opportunity to comprehensively enhance the tourist image of the complex. Without a real architectural value, the history of the building built in the early 60‘, led to the decision not to erase the architectural idea behind it, but to reinterpret its essential characters: those of a stilt structure with slight pillars and light – transparent enclosures.

Starting from this image, the project intervene on the existing building envelope that is fully redefined, bringing bare the structural skeleton and the original idea of a slight and mass- less object. On this structural mesh is grafted a new skin, mostly glazed protected by wooden sunshades, whose slats become more dense and enclose the blind parts. The new envelope therefore forms a succession of opaque and transparent segments, the first functional to enclose new service areas and technical rooms, the seconds to enhance the panoramic view to the coast and at the same time to increase the visual and physical permeability of the building. 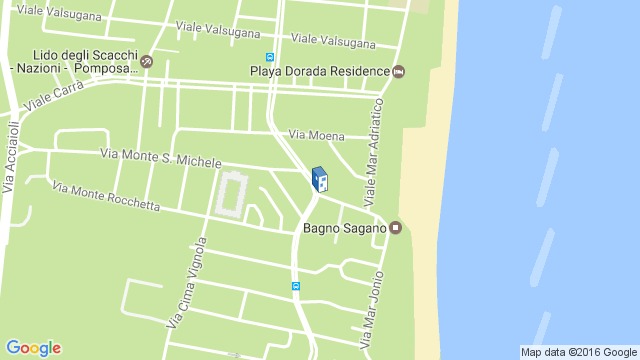