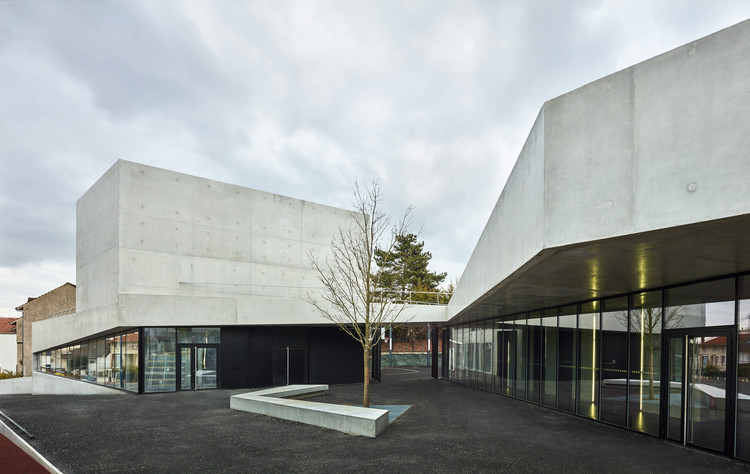 Text description provided by the architects. The building is located in a 1950s residential area in the Paris suburbs. The large sports hall is positioned at the far end of the site, giving the street a degree of amplitude and generating a public space which reinforces the building’s status as a community facility. The volume of the accommodation is in keeping with the houses in the neighbourhood. The fragmentation of the programmes produces a displacement between the two volumes, offering glimpses of the central part of the site and opening up views towards the gardens.

This dispersion of volumes is contradicted by a continuous canopy which breaks up the perspective by obliquely distorting and twisting the vanishing lines. As it unfolds, it creates an invisible balance between the various points of tension the length of the canopy.

The displacement of the volumes expands the space and sets up contradictory vanishing lines. This open, dynamic shape alters the perception of limits and loosens the usual relationships between street and site. Architecture ceases to be a border between public and private spaces – the building allows glimpses of what is usually concealed.

A completely transparent gallery offers views from the street of the outline of the changing rooms. The contrasts produced by the matte, shiny and transparent surfaces accentuate the impression of an abstraction of space.

The large hall has natural lighting on the upper part of all four sides, with opalescent glass diffusing a uniformly soft light. The ceiling appears to be in a state of levitation, and the structure is absorbed to the point of disappearance by the double thickness of the glass. The lower part of the hall comprises spaced vertical slats; one side of the slats is grey. The hollows house the technical services and the black-coloured acoustic treatment. These gaps reinforce the impression of depth and lend thickness to the whole.

The grey concrete, the glass, and the shiny and matte surfaces are varied over the different spaces, creating a timeless atmosphere. 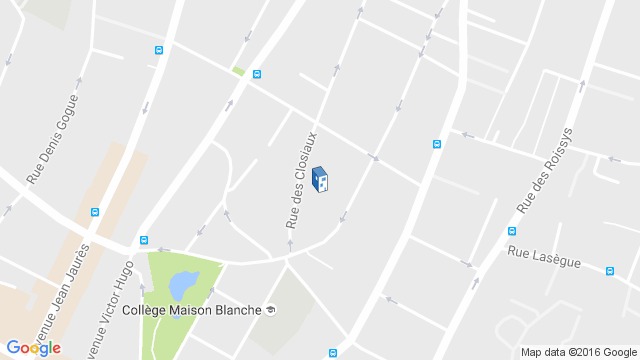 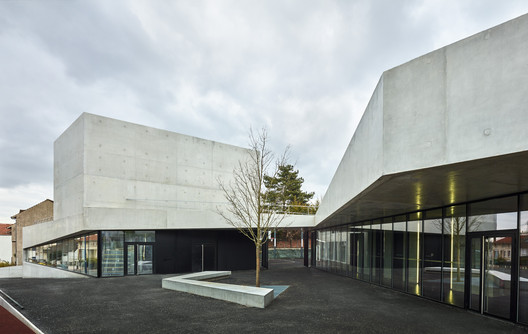