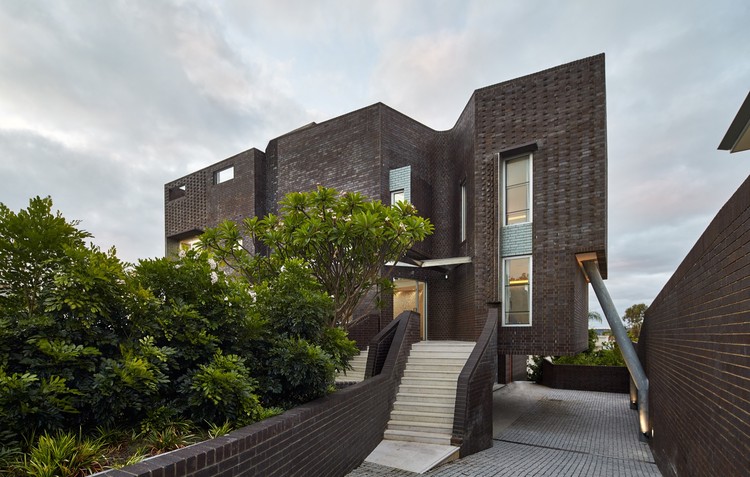 Text description provided by the architects. Our clients desired a building that would endure time, evoke a sense of permanence and a sense of already existing on the site. Brick was the natural choice that immediately met this requirement.

The site sits on the edge of the Swan River with views to the city of Perth. The design creates an experiential connection to the meandering river, a fluid and dynamic body of water that has carved out mass forming a direct engagement with the occupant.

The street is revealed through the pushing and pulling of the protective brick walls while opening on to the river view. The walls wrap around the east and west side boundaries filtering the intense Perth light and views through brick screens and bouncing light from reflective brick on deep reveals.

The bricks mass is simultaneously heavy and light; one storey is hung from the upper level and the cranked columns on the east boundary. At a finer level brick patterning slips and slides continuing the sense of movement.

The house extends over five levels with the ground semi embedded in to the earth. This is used as an opportunity to explore a change in experiential weight and movement as the house frees itself from the ground. Each level becomes lighter and more fluid finishing with the upper level roof terrace that opens and welcomes the meandering Swan River.

It is purposely placed to the north of the site and allows for future sub-division to include an additional dwelling as part of a suburban densification program. One level of the house is designed to be self-sufficient and act as a separate apartment dwelling allowing friends, relatives or other people to occupy the site.

Geo-thermal heating and cooling maintain constant temperatures. The thermal mass of the house has enabled no additional heating in winter to date. A thermal chimney over the entry space extends for three levels, extracting hot air in summer using a low velocity fan.

The house position creates a long and stretched entry garden that includes a meandering path through the evolving forest. The mature trees partly screen the house from the street and slowly reveal the house and entry to visitors as one walks through the garden. A sense of mystery and surprise begins with the entry to the house and finishes on the upper roof terrace level.

Product Description. One material is used on the house and on the boundary walls, Austral Elements Platinum and Zinc. Slightly different in appearance both bricks reveal a mysterious depth and shimmer over the duration of a day.