Save
Cappadocia’s Fairy Chimneys: A Collaboration Between Humans and Rocks
Share
Or
Copy

Fairy chimneys, also known as hoodoos or tent rocks, are spooky looking spires of rock that range from the height of an average person to over 40 meters. While recently on assignment creating one of his time-lapse videos for Turkish Airlines, photographer and filmmaker Rob Whitworth captured the fairy chimneys found in the Cappadocia region of Turkey in all their eerie charm.

While this geological process happens all over the world—fairy chimneys can be found in Taiwan, the US, New Zealand and Jordan—it is only in Cappadocia where they have been transformed into houses and churches through a sort of human-rock collaboration.

The magical-looking result of this human-rock partnership was many millennia in the making. The first Cappadocian volcanic rocks were formed millions of years ago, followed by further centuries of natural forces that eroded the rock into their distinctive forms. The human touch to the Cappadocian fairy chimneys took less time than Mother Nature’s, and began out of necessity when early Christians during the Roman period sought refuge within the rocks. On the run from persecution in Rome, upon reaching Cappadocia (the town of Goreme in particular), they discovered the malleability of the rocks and began to carve into them. A system of manmade caves was created throughout the fairy chimneys, which became homes, churches and stables.

Today, the fairy chimneys serve as a refuge for tourists rather than those fleeing empire-wide persecution, but remain uncannily unique. Some of the chimney caves have been converted into museums and hotels, letting people truly explore a built environment that owes its creation to volcanoes, wind and rain as much as ancient human intervention. 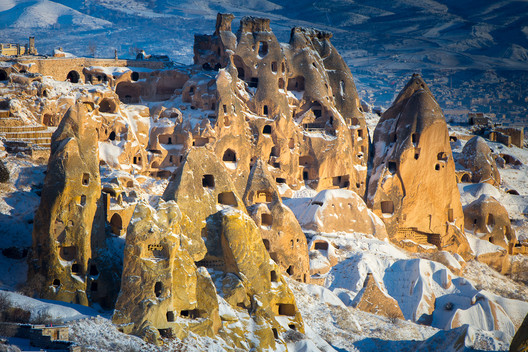