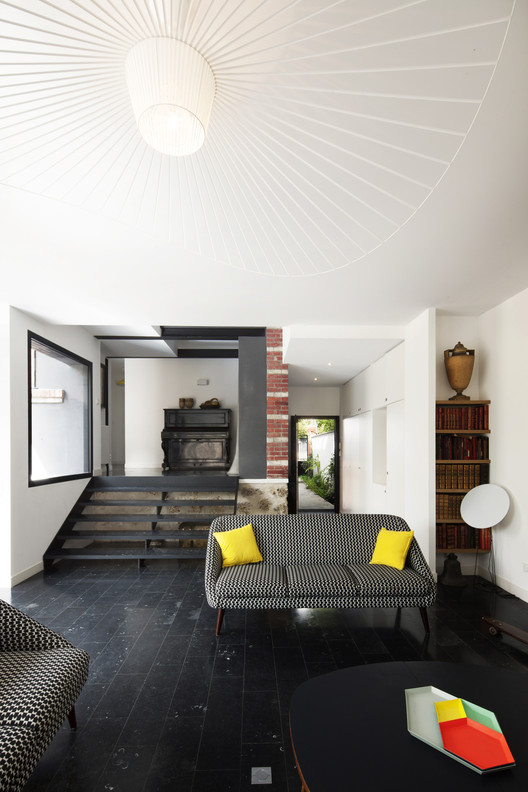 Text description provided by the architects. The existing house lies on a generous lot and has a typical 30's style. Despite the state of degradation, its original architectural language was kept intact: two colours decorating bricks (…), stone basement, apparent metallic lintels, etc.

The house also has features and proportions witch are to be found in any family house of that era.

In the client's program the existing housing surface had to be tripled.

The extension consists in an original form attached to the pre-existing house, showing a contemporary free adaptation of the house pattern. It is used as a mean for two major purposes:

On the one hand, the project keeps the pre-existing house intact, preserving its own original typology.

On the other hand, it generates two specifics, independents entities with their own volumes and design expressions, and creates the in-between part as an architectural transition space.

This architectural transition space is a real metaphor of one of the leading concepts of the agency's work: This is the place where the two worlds melt together and creates the unification of the architectural pieces of the entire new building, in terms of linking rooms together, allowing to combine and enhance use of the different spaces of the different parts of the building, managing the fusion of the two specific times of building attached to another, etc.

On the urbanistic side, despite an important amount of housing surface created, this distinction marked between the pre-existing house and the new volume created helps indeed to blend the project in the architectural context of the whole district area where it takes place.

At last, this gap 'in-between' the pre-existing building (existing house) and the new building (extension) is a technical value for the project. It ensures an independent structure for both building parts, avoiding the under-building works and also avoiding the differential settling of the terrain under the constructions.

The volume part of the extension reads into the archetypical family house: two-symmetrically-sided rooftop, hinged window shutters. Deliberately a fresh copy of the pre-existing house, cleaned from all its design details of the facade, from all the non-functional elements in the design of the roof and of the façades and cleaned from all the architectural patterns of the pre-existing house architectural style.

Under this volume, and between these two different parts of the project, lies a vast space that shelters the common life rooms of the entire building (living-room, dining-room, kitchen, library, music room, vertical circulations) enlightened by the surrounding sunset light.

A floor opening is created through the existing floor of the house, filtered by a residential net, in order to allow people to enjoy the 'in-between' space as they float thanks to this net between to eras of constructions. But this hopper is also a communication for the two generations in the family: the children, in the new building part, and the grown-up, in the pre-existing house part, meet up there, at the centre of the connection between the two entities of the project.

It's in that very spot, where two different construction eras meet and two generations connect, where the expected event of the project is revealed: The typical architecture of the pre-existing house develops itself through this linking space and inverts its outer facade to create the inner surface of the wall that becomes the surrounding element of the common living rooms inside the extension. This mirror effect of exchanging surfaces, materials and architectural vocabularies tells the whole history of this family project as a living element that evolves through time, space and other abstract dimensions.