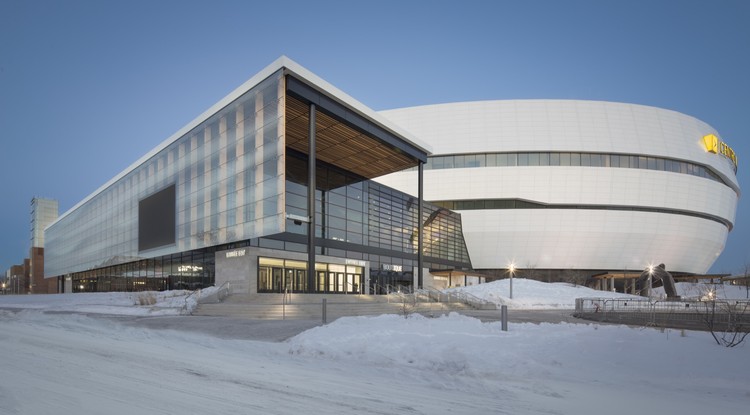 Text description provided by the architects. The idea to build a multifunctional arena in Quebec City began in 2009 with the creation of the group “J’ai ma place” (which translate in a double meaning : I have my seat/I belong here), which had the mission to revive the popular craze for the return of a team professional hockey in the old capital. The project, strongly supported by the mayor of the city, has quickly captured the attention of the media and citizens. It’s in 2012 that the mandate to design this project was officially granted to the SAGP integrated team. The Videotron Centre is now a unifying project for an entire population, proud to have witnessed the birth of a unique infrastructure of its kind in the heart of the Quebec City region.

Built on the site of a former hippodrome, on the edge of the Limoilou district, the main volume of the amphitheater clearly marks the function of the building across the city. Its pure white skin and openings evoke the movement of the snow moved by the wind, snowdrifts, and more broadly the nordicity of the city. The snowdrifts, formed by icy winds, delight the eye and shape our landscape. They subtly became the visual representation and conceptual line of this sports and cultural facility of Quebec. The structure that supports this curved façade is in laminated timber, a detail that greatly colors the perception of peripheral passageways. The openings that undulate around the perimeter of the volume offers unique views of the city. From the outside, the white dome is visible from almost everywhere in the city. The internal configuration of the building, following to the principle of open concourses on the bowl, invites to the celebration and the free movement of users. The overall feel of the place is festive, lively and stimulating.

Videotron Centre presents a hybrid structure of steel and laminated timber. The use of wood has been chosen as a support structure of the envelope of the main volume to elegantly adapts the curve of the outer wall and gives a unique look to peripheral concourse. From the main concourse to the lower roof on a total height of over 25 meters, this structure has only an intermediate support at the upper concourse. The laminated timber arches, located at a distance of 5 meters from each other, create the 92 facets of the oval volume of the enclosure of the bowl.  Black spruce - in section 25 by 25 millimeters - was selected for its local availability and structural qualities, allowing to refine the dimensions of the impressive arches.

The lobby, generous and open to the exterior public square brings the imposing building to the pedestrian scale. The lobby features a long screenprinted glass wall acting as a sunshade to minimize solar gains in summer. A hybrid structure of wood and steel has been used to support the facade of over 93 long and 11 meters high, dramatically suspended 4 meters above the ground. At night, the wall is highlighted to provide an increased civic presence. Ultimately, the wide public square will undoubtedly become a favorite place to watch a hockey game outdoors on the huge built-in screen.

The amphitheater has a large number of configurations to enable a wide variety of sports and cultural events. In the show configuration, it can seat 20 396 people and 18 310 in the hockey configuration.  The infrastructure meets the NHL requirements and allows to possibly welcome a team in the upcoming years. The Centre is aiming for a LEED NC Silver certification, which is rather rare for a building of this type.

With the construction of Videotron Centre, Quebec City has adopted a new fun contemporary equipment, evocative, sustainable and connected to its community. 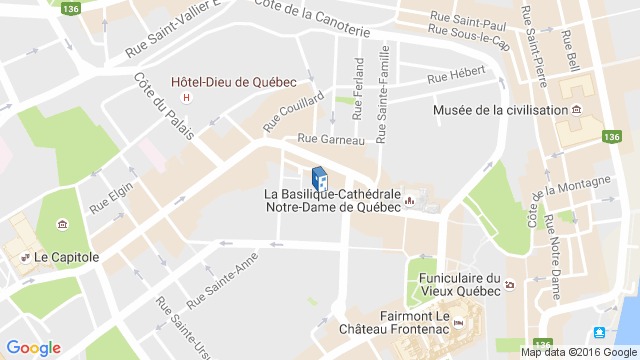 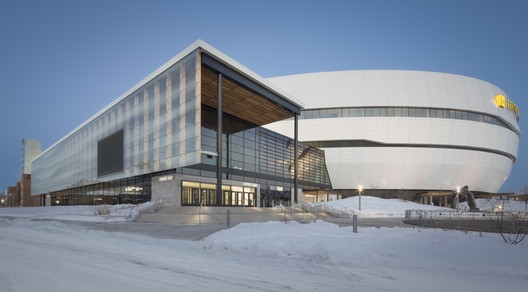