Kengo Kuma & Associates have been tapped to design a new high-rise residential complex on Kutuzovsky Prospekt in Moscow, adjacent to the new business district of Moscow City. The project will be the first urban plan in Moscow to take the form of superstructures rather than individual buildings, and will be Kuma’s first project in the Russian Capital.

The 360,000 square meter complex will follow an open-courtyard concept where the elongated building structures will frame a wide promenade directing pedestrians through to the nearby Moscow River. Public and community social spaces will also be integrated throughout the project, along with an underground parking deck and small indoor garden.

On the outside, the building facades will be constructed from matte anodized aluminum to reflect sunlight and create “an effect of lightness and transparency.”

In an interview conducted by the Architectural Council of Moscow and included as part of a press release for the project, Kuma explained his inspiration for the site and his take on the current state of the architecture world:

Archcouncil: Why have you decided to work here? What are you interested in?

Kengo Kuma: The location of this project is very important for Moscow, because it’s near the Moscow River, which is the new center of activity in Moscow. The aim of the project is to combine the big boulevard and the riverside; and it can change dramatically the urban environment of the location.

A: The Moscow Government approved the unified urban development concept of the Moscow River’s adjacent territory. What challenges are development projects facing, which, like yours, will be implemented on the riverside? And what benefits can they bring to the city?

KK: In the XX century the riverside and city life were totally separated. On the riverside there were factories or warehouses — those houses block the river from the city. But in the XXI century people would like to enjoy the nature of the river. In Japan we also have the same program: the nature, a river or ocean, and a city have been separated by industrial buildings for a long time. In Europe people face the same problem — when buildings have broken the nature and the city.

A: What do you think about the trends that were demonstrated at the present Architectural Biennale in Venice: simplification of shapes, cost reduction, single use policy? What’s your forecast for the future?

KK: Now the relationship between society and architecture is changing, as society is very often critical to the cost of the building, and also the environment has become very important. In that new situation the architects should find a new way of creating their character; as still a strong character is very necessary for architectural design. But at the same time the cost, environment and global warming effect have become very-very important. And we should find the meeting point of these requirements.

A: Do you think that the competence of modern architect is changing?

KK: In the beginning of the XX century, the Russian architects tried to combine the technology of the XX century and the new design. Nowadays what we should do is to combine the environmental technology and architectural design; because we have many new technologies for ecology and for sustainability. But the architectural design and those technologies are totally separated. We should integrate those things together.

In this project we are designing the riverside; we even use simulation of wind flows to create the most comfortable environment. This work can be a good example of integrating the two kinds of technology.

News via Archcouncil of Moscow. 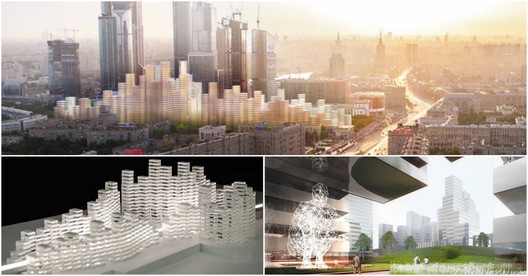