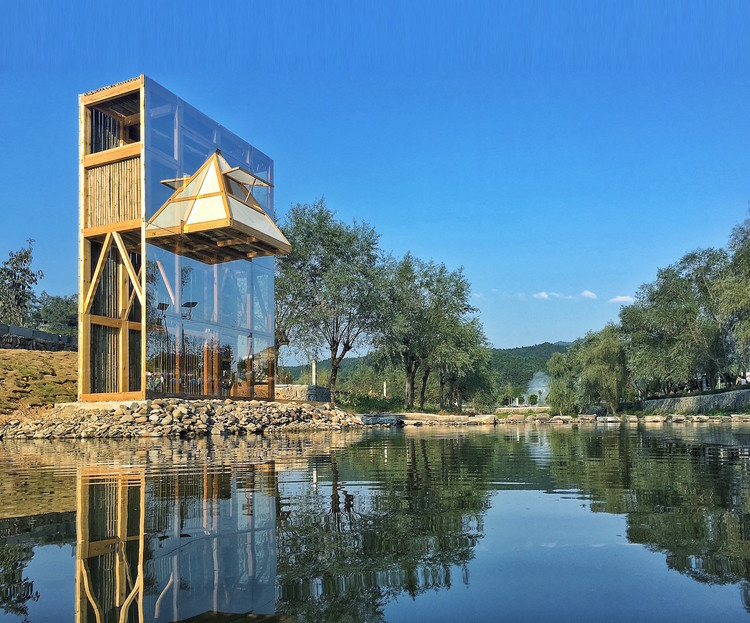 Text description provided by the architects. The Shelter · Mirrored Sight is part of the Shelter Series architectural installation practice. It is set by the north bank of Longxi River outside the old town of Longli in Jinping county, Kaili Area, Southeast Guizhou.

600 years ago, a group of the Ming citizen immigrated to this area from all over the country as a military tillage, which was in fact a form of suppression to the northeast Qian people’s rebellion. Over hundreds of years, people there built their town according to Nanjing’s urban layout and built their houses following the Hui style building. And therefore Longli has gained this unique south Yangtze River region architectural nostalgia different from the surrounding Miao and Dong ethnical form. Yu Qiuyu, the famous writer, once remarked Longli as a lonely islet of the Han culture amidst the minority groups. For the tourists, the islet might be merely a cultural symbol, whereas to the local residents, this islet symbolises their situation in all forms of survival predicaments. Once a strategic frontier town, Longli has gradually become a common town over the years and the Han people have also blended into the locals – they once only marry the Han people within their society and now they intermarry the local Miao and Dong people. The Longli people have been again and again separating from and blending into the neighbourhood and consequently they broke out from the past and created the local diversity.

In designing the Shelter, architects articulated the isolation and tension of the Longli people and the vernacular community. They then created this Mirrored Sight of Longli. The shelter itself is now a place for people to rest and have fun, and meanwhile a new regional landmark.

Right opposite to the old town by the river, The Mirrored Sight shelter reflects the town’s image. Longli sits within the town whereas the shelter lies outside. There are thousands of residents in Longli and the shelter is just for one person to reside. The town is for daily life and the shelter creates unusual experience for people – in the town of Longli, they belong to a big group, however here in the shelter individual is better appreciated.

The shelter is connected to the old town by a stone bridge and the locals would go across it everyday to farm, to fish, to do laundry and to wish dishes. The site itself is a space transition from the man-made old town to the natural landscape.

There are two floors in the shelter --- the upper floor for people to overlook the scene and the lower floor for one to stay and rest.

The axes formed by the old town and the river defines the relationship between the shelter and the site. The architects used completely different materials to construct and differentiate the northern and southern facades. The northern façade, densely covered by local bamboo wood, parallels with the axis of Longli town, and the southern façade, cladded with Pilkington Mirropane (single-transparent glass), paralles the Longxi River. Therefore, the installation comes into a simple shape narrowing eastward. The entrance of installation faces to the old stone bridge, making a relationship between the ‘Opposite Shelter’ and old town.

The glass reflects scene of Longli’s daily life south to the river, and creates a shadow of the reality. The mirror image of the pyramid becomes a shadow of the pyramid itself. The refraction and reflection of the glass would give people who gets inside the installation an experience of an integration of a complex mirrored sights, which one can hardly which is real and which is unreal. The Shelter itself is not completely lying out of the Longli town, rather it is an installation built upon the inter-related images of the town of Longli.

The shelter’s west window frames a view of the Longxi Bridge, a bridge that was built in Ming dynasty and forms a shape of bow and arrow together with two roads by the river. The east window captures the view of the Scholar Bridge, which is a memorial to the ancient local scholar Wang Changling. The three apertures of the Scholar Bridge forms the shape of a fish creel and the scenes captured in the two windows are both import local Feng Shui (traditional Chines geomancy) imageries.

The pyramid shaped inner space would give the wrong impression that the space is rather narrow. However, when going upstairs, visitors would find it in fact much bigger than they thought.

In the fake window on the north façade, there cracks a crevice that might give people a fright when going down, which is in fact a delusion given by the closed façade of the fake window.

After getting dark, the shelter shows an utterly different presence from the daytime. The overall shape of the structure merges into the darkness and the pyramid emerges together with its mirror images, seemingly floating in the air with its reflection in the water. Hence, an imagery of the Lonely Islet is brought in the air of Longli’s most natural and original scene. 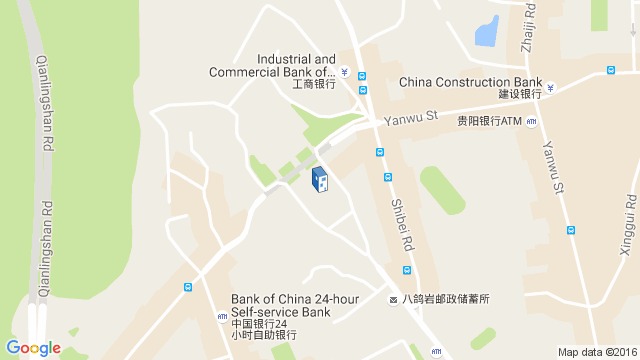 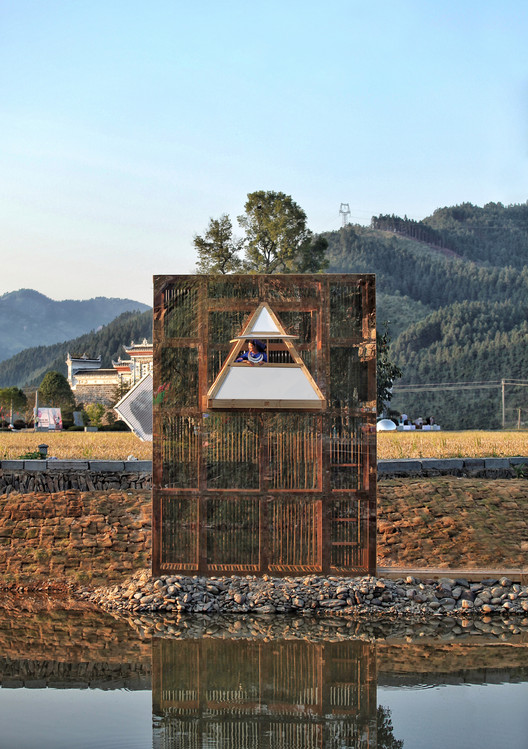 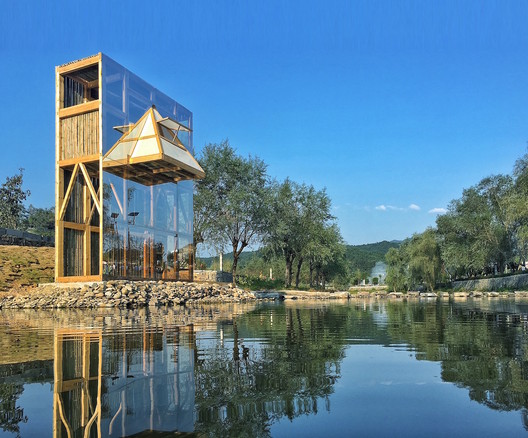