Save
Mechanic Linking to the Epinettes / Atelier MOSCA 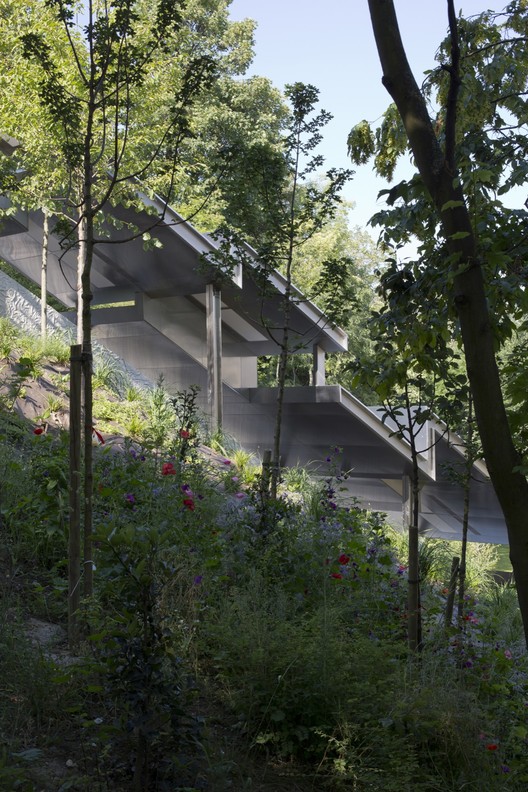 Text description provided by the architects. Built as a route, on an exceptional hillock in terms of view and landscape at the foot of the towers of Épinettes, the project was developed around three major goal:

- Offering an open pathway allowing not entry into a tube to reach the hillock but allowing open-air movement in harmony with the broader landscape of Ile-de-France and Paris;

- Offering contemporary facilities made up of minerals consistent with the greenery of the park;

- Recomposing the landscape and woodlands of the park, part of which had been left wild for a certain period.

- shouldering as a motor for landscape insertion;

- origami with the deployment of a covered canopy opened by stainless steel folded strips offering an open structure and views of the landscape. The canopy, through its structure of folded and fragmented roofing, offered more room for the greenery.

The escalators were inserted into a crumpled concrete structure making up the lateral guardrail and the mineral body of the structure. At each landing linking the pathways of the park, information tablets, benches and cultural billboards develop spaces of communication, pause and dialogue.

The stainless steel canopy is equipped with tiles of LEDs offering interactive lighting according to time of day and season. A veritable reshaping of the wooded landscape was implemented. A motor of insertion of the project, the green zones were combined to allow regeneration of the wooded land.

A system of terracing of the vegetation (a layer of bushes and herbs around the structure before a layer of tufts and stumps, then trees) allows users to avoid a feeling of being closed in and allows greater visibility of distant landscapes and filtered views of the surrounding woods.

The project creates clearing effects (between platforms) alternating with vault effects (in the immediate surroundings of the platforms), giving a rhythm to the journey.

It favours greenery echoing forests of beech, oak and hornbeam, ensuring improvement of the woodlands. 260 trees were planted, as well as 2,500 bushes and 13,500 carpeting shrubs covering 1,600m2.

The project is part of a study of new means of movement and local mobility. The slope and the complexity of serving Epinettes through the park allowed for the studying of a project which, while being an integral part of the continuity of public transport, such as is the Grand Paris Express and the electric buses put in place for Fort d’Issy, offers a contemporary solution for local mobility. Initial figures, at the beginning of the project, estimated a flow of people at rush hours of 600 people. The service will be operational from 7am to 10pm. The project has seen the deployment of six escalators measuring 80m allowing the scaling of the 25m slope, while the space required is 400m2. 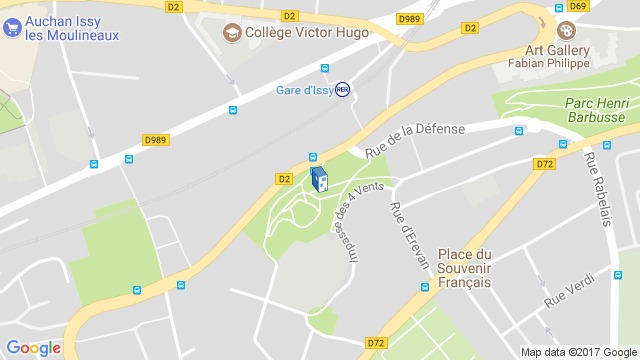