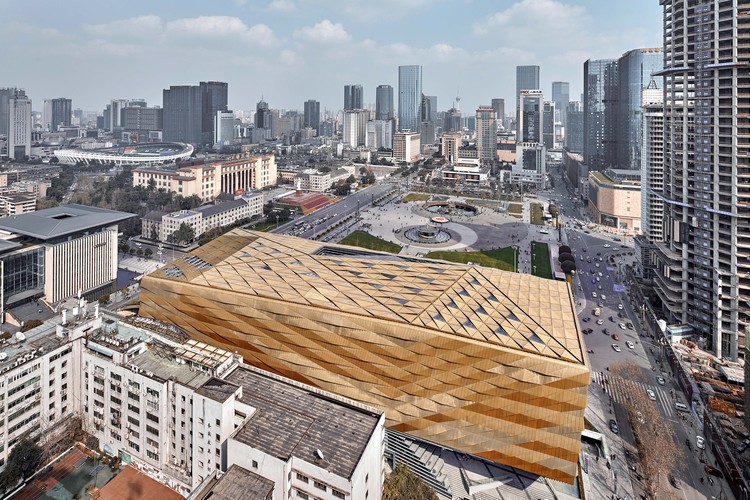 Text description provided by the architects. In 2007 Sutherland Hussey Harris, in collaboration with Beijing based Pan­solution, won first prize in the international competition for the design of the new City Museum for Chengdu in Sichuan, China.

Tian-Fu Square was recently established in the historic core as a new central focus of Chengdu. The Existing Science museum forms the entire Northern edge with a giant statue of Chairman Mao saluting the main North South city axis, and on the East side a new concert hall is planned.

The New Chengdu Museum sits on the West side of the square and maximises its profile to present a façade of commensurate scale and proportion to embrace and address the huge scale of this new square and establishes a strong formal relationship to it by forming a simple enclosing rectilinear profile. The building further enjoys and celebrates this relationship to this monumental public space by extending an internal promenade of public foyers and circulation behind the entirety of the veiled façade addressing Tian-Fu Square.

The long narrow site is exploited using all the public areas to maximise a dramatic relationship with the new square, the remaining façades consequently enclose the largely hermetic exhibition halls, these are represented as a giant crafted artefact in the city cloaked in a precious skin of copper alloy rigorously profiled to play with light, shade and texture whilst accommodating all the technical requirements for ventilation grilles. Aside from the east face this skin is 'lifted' to reveal glazing at street level, allowing a more human scaled intimacy and a relationship to the interior.

The form envelopes a new undercover outdoor public  space - a monu­mental gateway through the building, offering a large outdoor public space where people can gather, cultural events can take place, even the local street market extends through to the square. This gateway within the building also creates an important connection between the C16th Huang Cheng Mosque, the most significant in South West China, and the main square. The main entrances to the museum, theatre and museum offices all connect with this route through the building.

The Museum requirements extend to over 65,000m2 of development and in­cludes exhibition space for Natural History, History and Folk, and an 800 seat Chinese Shadow Play Theatre as well as a 1000m2 Temporary Exhibition space. A huge challenge within the project was to be able to provide the museum with their requested 30m clear span exhibition halls whilst assuring the structure is capable of withstanding an earthquake measuring up to 8 on the Richter scale. In addition to this the city's subway network runs under the Northern half of the building, resulting in the above ground section of the building cantilevering over the tunnels.

A rigid diagrid steel lattice forms the structural shell enclosing the enormous interior volumes of large climatically controlled halls, The building further extends 24m into the ground to accommodate the conservation stores, theatre and plant rooms and is structurally isolated from the effects of any earthquake via a protective box structure into which the whole construction sits.

Unusually for China, Sutherland Hussey Harris with Pansoloution design, Beijing, were retained beyond the conceptual design phase and contracted to deliver the detailed and production information stages for all the public areas of the building, the detailed design of the skin and its integration with the structure and the landscape  and subsequently all site supervision related to this work.

Within four months after the opening, the museum has attracted more than one million visitors. 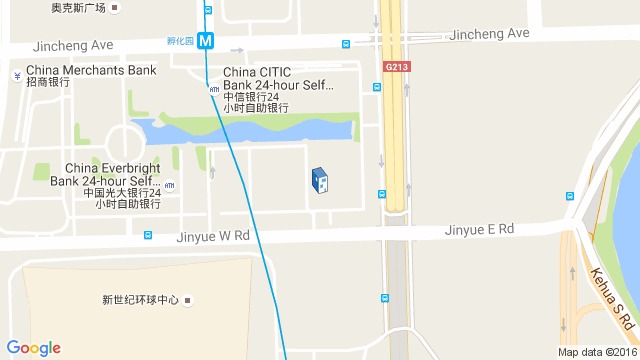 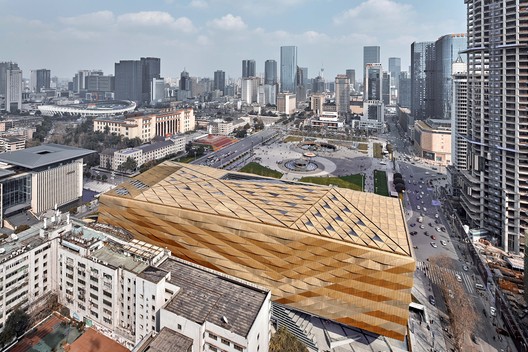