The National Museum in Szczecin - Dialogue Centre Przelomy is now the ninth project to hold the World Building of the Year title. Last year, the award was given to "The Interlace" by OMA and Buro Ole Scheeren.

Winners of the year's Future Project, Landscape, and Small Project awards were also announced. Read on to see the winning projects with comments from the jury.

“This project enriches the city and the life of the city. It addresses a site with three histories, pre-World War II, wartime destruction, and post-war development, which left a significant gap in the middle of the city.

“This is a piece of topography as well as a museum. To go underground is to explore the memory and archaeology of the city, while above ground the public face of the building, including its undulating roof, and be interpreted and used in a variety of ways.

“This is a design which addresses the past in an optimistic, poetic and imaginative way.”

The school is a new model of vertical school responding to the specific inner-urban context of the developing Fishermans Bend urban renewal area in the city. Accommodating 525 students, the new school will be an integral component of the Montague Precinct within Fisherman’s Bend providing an education and community focus as the area is developed.

WAF’s Future Project super-jury, comprising Kim Nielsen, Ole Scheeren and Coren Sharples selected the project for “the way the space interprets and promotes pedagogy” commending it for the way it connects indoor and outdoor teaching areas and differentiated learning environments.  The judges felt the architects overcame the challenges of designing a vertical school, using a central staircase as a point of interaction and as a gathering space.

The public event space was built for the Construction Industry Council (CIC)’s Zero Carbon Building (ZCB) in the summer of 2015 in Kowloon Bay, Hong Kong. It is a four-storey-high, 37 metre spanning, bamboo gridshell structure with a usable area of approximately 350m2 and a seating capacity of 200 people, placed in the ZCB Garden Area.  It is built from 473 large bamboo poles that are bent onsite to shape the structure and that are hand-tied together with metal wire using techniques based on Cantonese bamboo scaffolding craftsmanship. Recognised by judges as “an excellent architectural outcome” the project was commended as a “brilliant example of cutting edge simulation and modelling combined with delightful traditional craft and skill.”

The project is a hybrid park, where a storm water reserve has been combined with an urban park, playground and skate park, all made possible by dovetailing the masterplanning of the streets with the green infrastructure of the 22-hectare reserve. Judges praised the project as “a successful translation of Maori traditions that succeeded in being both poetic and imaginative in its creation of a landscape that captures the soul and nature of the area.”

News and descriptions via WAF. 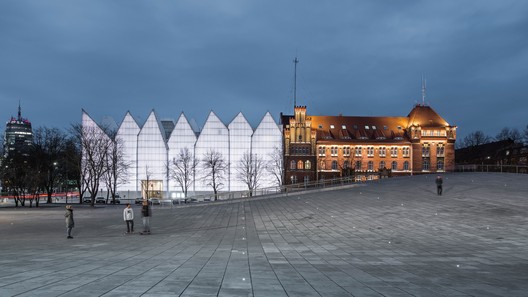