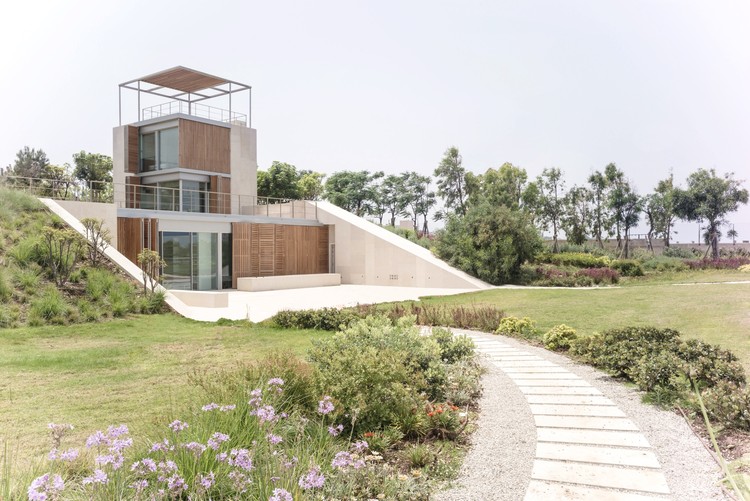 Text description provided by the architects. The project consists of four single-family houses on the coast of Aamchit, Lebanon as well as the rehabilitation of the existing landscape and old houses. The site slopes west towards the Mediterranean, its angle allowing for embedding the houses in the landscape in such a way that the front is open to the view and breeze whereas the other sides of the house are protected by the earth. Each house consists of a double-layer wall that retains the earth from the east and slopes with the land north and south.

The framing/retaining wall is doubled to create insulation and service passage against the soil’s humidity and to draw in cool air into the house. The double perimeter wall also works as a structure and is used for all the services of the house, leaving the ground floor open. A courtyard is inserted in the back to enhance cross ventilation and create a microclimate in the extreme days of summer and winter.

A tower that houses the bedrooms is placed at the southeastern side of the courtyard to provide shading. It works like a chimney to release the heat from the courtyard and the bedrooms. The stair and bathrooms are located at the east and south side to provide a thermal mass against the summer heat while the northwest corner is completely clear of the structure, turning the bedrooms into balconies when the windows are open. The combination of the courtyard and tower produces a new house typology that is used with degrees of variation on the site as the development grows around its common facilities and the sea.

Landscape. The general landscape strategy consists of creating a xeriscape that sets a transition from the ‘beach’ to the ‘mountain’. This is mainly achieved by the ground covering and associated plants and trees (ferns, weeds, flowers, and olives). Along with the ground covering design, the site plan revives the old eucalyptus road as a pedestrian spine for the new houses.

Relying on a cut and fill strategy that preserves all the fill on-site, the houses are placed in such a way as not to block each other by lifting the back houses on fill. Emphasizing the path network, shrubs are planted to enhance the experience of approaching the sea. 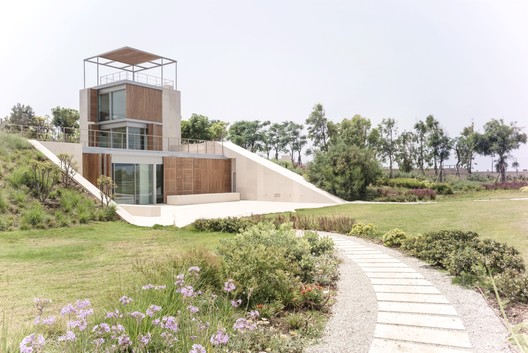