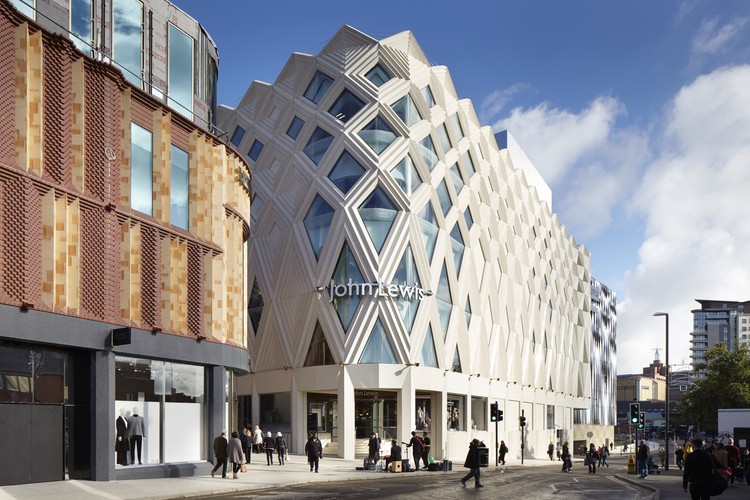 Text description provided by the architects. The brief for the Victoria Gate masterplan was to design a new, vibrant, key urban block in Leeds city centre which provided retail and leisure uses anchored by a department store, with an associated car park. The visibility and identity of the department store was an important part of the brief.

The scheme needed to be designed as an extension of the Headrow, the city’s main civic axis, and Hammerson’s brief right from the beginning was that the scheme should not be a ‘mall’ but more a 21st century extension of the existing Victorian arcades for which Leeds is famous.

The buildings appear as three distinct elements with individual identities that relate to each other and the vernacular of Leeds.

The new John Lewis store anchors the scheme. Placed on the extension of the Headrow, the city’s main civic axis, the store forms a visible gateway into the city centre.

The materiality of the building draws on the history of terracotta façades in Leeds, often produced by the local Burmantoffs Terracotta works, providing a modern interpretation of a traditional material. The façade order is also influenced by the textile history of Leeds as well as John Lewis, and is designed as a layered terracotta skin reminiscent of woven fabric. The diagrid is the ordering element that repeats along the perimeter of the building ; the resulting diamonds contain infill panels which respond to the internal layout of the store and the immediate context, providing transparency and ornamentation to the building.

The Victoria Gate multi-storey car-park [MSCP] is visible from all main urban approaches. From the outset the intention was to separate John Lewis from the car-park, but to acknowledge their shared purpose and relationship to the façade.

The Arcades building is designed as a two storey, twin arcade with a complex glazed roofscape continuing the grand history of Leeds’s 19th century arcades. A large casino sits above the arcade, partially over-sailing it and creating a four storey civic frontage on Eastgate.

The exterior of the building evolves from the 19th and 20th century language of the surrounding Blomfield and Victorian brick and terracotta buildings, with sculpturally pleated brick elevations – brick-faced pre-cast concrete panels-  changing in rhythm and scale responding to the context of the site.

The interiors of the arcades are inspired by the Victorian tradition through the use of curved glass and patterned stone floors, based on Leeds’s woolen herringbone cloth. 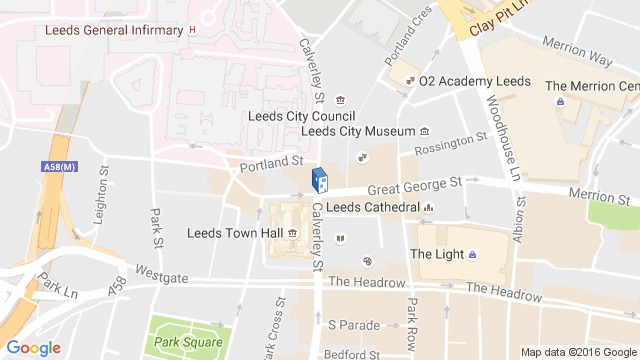 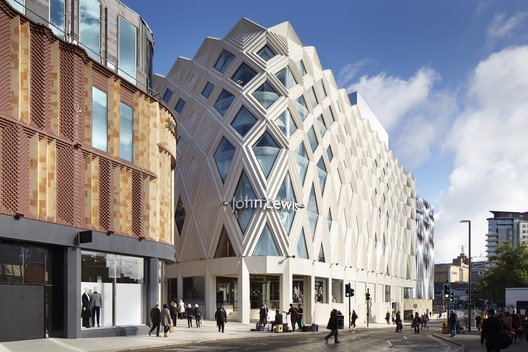