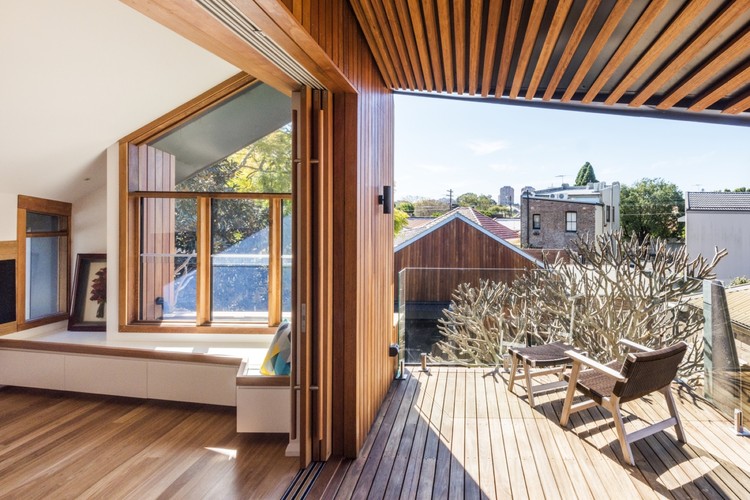 Text description provided by the architects. Power Lane House is an upper level extension to a heritage family home in the inner coastal suburbs of Sydney and includes a rear laneway garage. The growing family wanted a space for the parents to retreat and additional storage for their large collection of outdoor sporting goods.

The Challenge
The design challenge was to create additional space whilst maintaining and celebrating the authenticity of the original heritage house, particularly as viewed from the front street. Additionally, the owners wanted the garage at the rear to ‘tie in’ with the new upper level extension and for light and sun exposure to be a priority throughout the property.

CHORDstudio Principles
Along with addressing the client’s brief, we believe a project should consider the context of the site and contribute to the neighbourhood character in a meaningful way. This was achieved by considering and responding to views from multiple points around the site that included the front street, side laneway, rear laneway and rear commercial shopping strip as unique opportunities.

The Resolution
The challenge was resolved by creating a habitable upper level structure for the extension which sits behind the ridgeline of the existing heritage house and angles away from the street, effectively obscuring its view from the front. Additional space is created under the new roof, and adequate ceiling height is achieved, by folding the ridgeline towards the backyard. The same ridgeline is picked up again on the garage to create continuity between the two new built forms. The garage wall which faces the house is angled back as if it is looking up at the new extension, further enhancing the connection between the two new forms. By minimising overshadowing, the form of the garage addresses the client’s wish to maintain light and sun exposure in the pool and outdoor entertaining areas and maintains enough storage area for the outdoor sporting equipment including five sea kayaks.

The structural design continues the design intent to separate the new from the old with a steel portal frame which sits over the top of the existing house, not touching any of the existing walls.

The interior design of the upper retreat captures light and sun by peeling the roof back to expose a deck and large windows. The retreat can open to create one large space which includes a deck, lounge and sleeping area and close by using large sliding doors to restrict the early morning sunlight in the sleeping area.

Light and connection to the outdoor world continues in the ancillary spaces where a double skylight sits over the hallway and is fed into both the hall and adjacent bathroom by folding a timber bulkhead on itself. The bulkhead runs north­/south along the ridgeline, directing light, holding services and as the carpenter on site described it, “looks a bit like a kayak”. 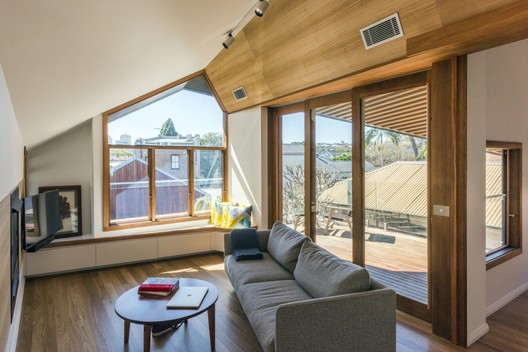