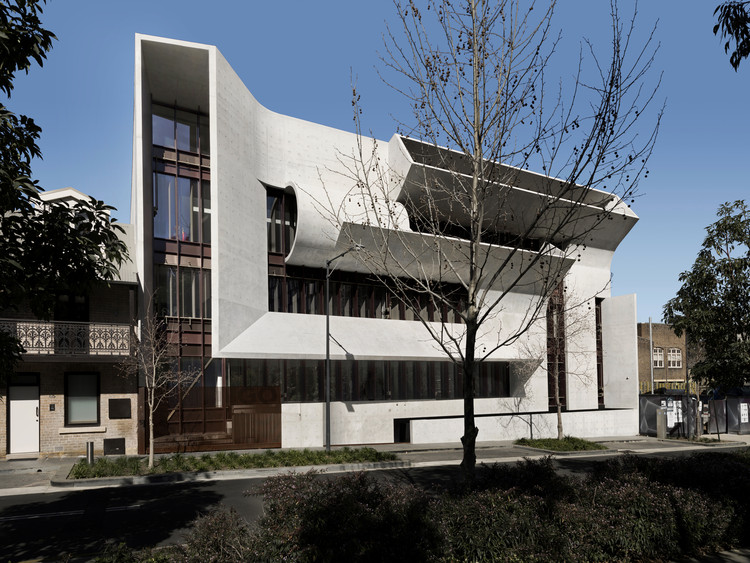 Text description provided by the architects. A piece of sculpture to be lived in, this exciting project fronts newly-built Central Park in Sydney’s Chippendale and creates an inspiring residence for an art collector. Behind a façade of sculpted concrete, serene living spaces and monumental halls create a dynamic spatial interplay of spare interiors in which the main decorative element is light.

The concrete façade of Indigo Slam is alive to the changes wrought by light, shade, sun and cloud, providing the new urban park across the road with a lively backdrop to public life. Approaching from O’Connor Street, a patterned steel screen opens to lead the visitor into a generous coved vestibule.

From here, the space compresses to a low and narrow corridor before suddenly opening to a cavernous stair hall lit from concealed roof lights overhead. This room is a space unique in Australian residential architecture – grand and austere in its size and sparseness, but inviting and exciting as it leads one upwards through the building.

As a counterpoint to this dramatic spatial sequence, the living areas leading off it are informal and intimate. Bedroom suites occupy the first floor, overlooking the public park to the north. The curves and planes of the façade here act as screens to provide privacy and shade for the occupants.

On the second floor, sitting and dining rooms overlook the park. A sky-lit kitchen and study look back into the building, creating views across the stair hall. To the south, a small garden flat and three car garage address Dick Street.

Spaces are large but not ostentatious. Internal finishes are modest and pared-back: floors are brick-paved, walls are set render, fittings are simple.

The brief was for Indigo Slam to last 100 years. Materials are selected to wear and endure and fittings to last, with operable elements mechanically rather than digitally operated. These include oversized vertical timber blinds that turn and retract by means of hanging chains and awning windows operated by geared winders. The brass armatures for these moving parts lend a finely grained detail to the interior and to the steel, glass and concrete of the building façade.

The project aspires to an exemplary level of environmentally sustainable design with natural lighting, cross-ventilation, rainwater harvesting and adherence to passive solar design principles reducing the energy and water load of the building. Geothermal heating and cooling have also been incorporated into the design and solar hot water and photovoltaic cells populate the roof.

Indigo Slam represents a rare opportunity to add a large residence of substantial quality and architectural merit to the diverse neighbourhood of Chippendale, and participate in the reinvigoration this part of Sydney as a place of architectural and cultural interest.

Product Description. To explore an innovative new way of designing the skin of a building, a language of cutting, folding and stitching together was established; something once flat is made three dimensional and something once blank creates and enfolds space. The sculpted façades of Indigo Slam became alive to the changes wrought by light, shade, sun and cloud. The curves and creases of the concrete façade fold, open or close, concealing and revealing, to create privacy, open to the light, form a balcony or maintain outlook as the rooms demand. The plasticity of concrete was essential to creating the forms of the façade and the texture and colour of the white concrete provide the new urban park across the road with a lively backdrop to public life. 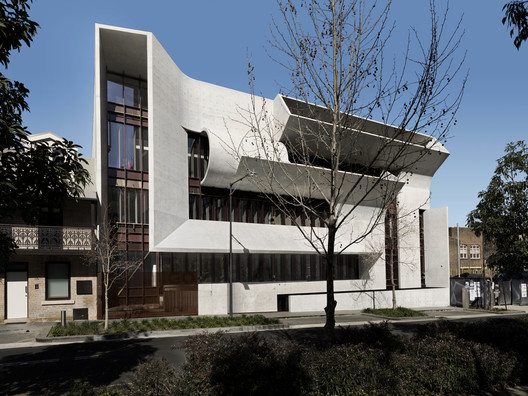