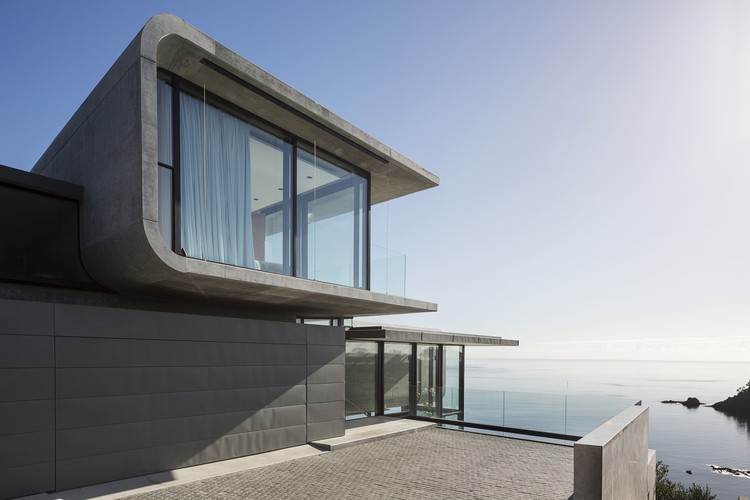 Text description provided by the architects. The site is an elevated promontory above a rocky cove at the western entrance to a double bay on Waiheke Island in Auckland’s Hauraki Gulf. The site slopes north-east toward a reef and sandy beaches opposite.

The house is a collaboration with the Client, an engineer with meticulous attention to detail, who owns a winery on the island. His sensibility for materials is directed by his Cypriot heritage and the sensory experiences founded in his Mediterranean culture. His brief was a single line instruction to enhance the experience of the occupants.

As a structural engineer he has an affinity with concrete and in situ concrete was defined as the core material for the structure.  The Client sourced travertine, remembered from his childhood that matched the colour of the beaches across the bay and the clay-coloured sandstone of nearby island cliffs.

From these four posits - a specific material sensibility, an engineered concrete shell structure, the inclined topography of the place and the forms of the old concrete buildings nearby - the house emerged.

The site is rebuilt as a series of platforms for living, aligned with the oblique contour, with a cubist pool of water part embedded, part exposed on the west edge.

The master suite, a reading room, a second guest suite and a studio are suspended above these platforms. Between them they create a stage for human interaction. This stage opens and closes to the exterior entirely, combining with the terraces and the pool to create a continuous surface bridging inside and out.

The east and west elevations most clearly articulate the separation between site and superstructure and the single continuous line that traverses the outer edges of the concrete shells. 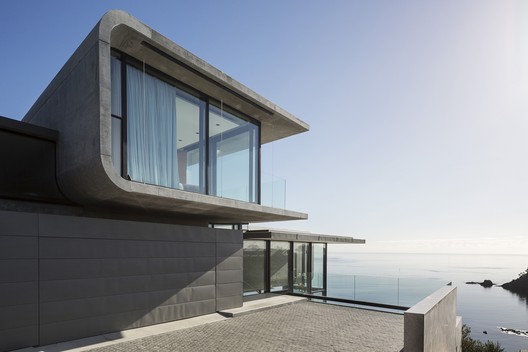