London-based firm Nex—Architecture has unveiled its plans for a new Royal Air Force (RAF) Museum as a part of the RAF’s 2018 Centenary Program. The new project will revitalize an existing RAF museum in North London that was created in 1972, transforming it into a visitor facility and promoting the airfield heritage of the museum’s location.

The new scheme will put emphasis on improving visitor experience by “establishing a clear route through the exhibition spaces.” A prominent new 40-meter-long entrance and visitor center will be placed inside the Hangar 1 building, acting as a welcome and orientation point. 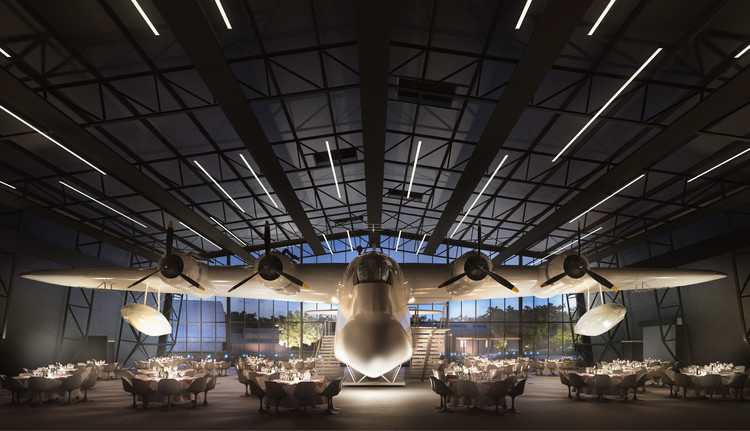 Inside, the hangar will be reconfigured to incorporate a new central hub providing a café, shop, members’ room, public viewing galleries and flexible use spaces. Clad in extruded aluminum fins and inspired by the overlapping blades of a jet turbine engine, this new element plays with visitors’ perceptions of transparency and solidity as they move around the building stated the architect in a press release.

The inside of the 5,200-square-meter space will additionally be finished in dark tones in order to compliment and provide a muted backdrop for the Sunderland bomber aircraft housed inside. Because this aircraft is too fragile to be moved, construction will be carried out around it. A new industrial door will be installed for access to other large aircrafts.

In addition to renovating Hangar 1, the project includes a new restaurant converted from a former officers’ mess dating from the 1930s. In this space, original brick walls and steel roof trussing will be complimented and contrasted with new ash paneling, display cabinets, and stained oak flooring.

The new buildings and masterplan will bring a much-needed coherence to the site, and will offer new spaces that enhance visitor experience and better communicate the story of RAF people and technology for its centenary year and beyond described the architect.

Work on the project will begin in January 2017, with completion expected in the Spring of 2018 to coincide with the RAF Centenary. 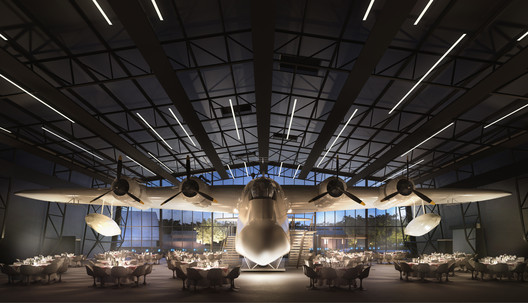