Save
General Hospital of Niger / CADI 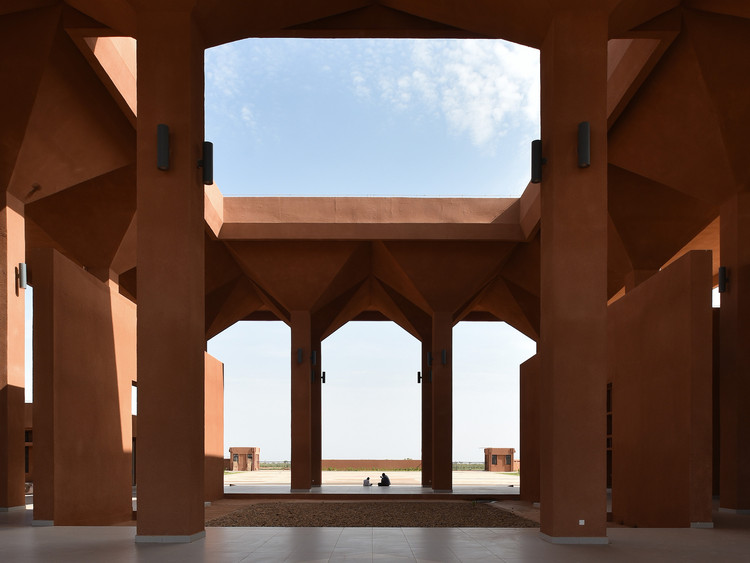 The Republic of Niger (Niger) is a landlocked country in Western Africa with over 80 percent of its land area covered by the Sahara Desert. Niger's subtropical climate is extremely hot and dry with annual average temperature up to 35 centigrade. The rainy season is from July through September. The rest of the seasons are dry seasons and its annual precipitation is low. Niamey is the capital of Niger and the center of politics, economy and culture. the population of Niamey is about 1 million and Islam is the dominant religion.

The project is committed by the Chinese and Niger governments, aiming to build a large scale general public hospital together in order to improve and upgrade the local medical facilities.

The site is located in a wide flat sandy tract around 7km at the northern side of the centre of Niamey city. This is the a developing dwell area with weak infrastructure. Local people expect a new hospital could upgrade their living conditions.

The public hall is an important connecting and distributing space for the public. A well-designed hall shall be open to the public and provide the easy access, function of sheltering , good ventilation without using air conditioners and energy saving.

Islam is the dominant religion in Niger, therefore we have considered Muslim worship halls scattered in the hospital in the design. Meanwhile, these worship halls can be transformed to temporary camping sites for patients and their families.

The inpatient Building is designed into a two-story courtyard space, connecting by continuous ramps and cloisters. In addition, it can meet the hospital accessibility requirements without lifts and elevators.

Medical Technology Building consists of four floors, including all important medical equipments and operating rooms in the hospital. The external wall adopts the single small-opening windows and the external sunshade in order to reduce the heat exchange.

Insulation is the simple and effective way to reduce the indoor temperature. All the roofs are designed with thermal insulating layers, which are prefabricated concrete panels, to reduce the heat transmission.

In the hot and dry environment, building shading has significant influence on the indoor temperature. In order to avoid direct sunlight, a number of external sun-shade components are designed. The gaps between the shading panels and the walls form air microcirculation around the windows, which is conducive to carry off the surrounding heat. The architectural technology of this sunshade system has high durability with in-situ concreting.

Buildings are mostly designed with the opened veranda of two sides’ entrances, forming good natural convection and improving the physical experience of people inside.

Precipitation is quite low throughout the year. However, the heavy rainfall is intense with strong winds, the leaves and dust blown by strong wind could plug the drain normally. Open-designed drainage is easy to clean and meanwhile presents an important facade element. The local loose sandy soil is conducive to the natural infiltration of rain as well.

Corridors connect various blocks of the hospital. The pillars of the corridor are widened to provide a larger sunshade area.

Since Niger is located in the west Africa inland, bulk import of common exterior wall material is highly expensive. Under perennial high temperature and illumination intensity, erosion of the building exterior wall would be serious. Local traditional process "Tyrol" style exterior wall is adopted in the exterior wall design. The typical construction method is to manually spray the mixture, which is composed of the local river sand and white cement/water under a specific ratio, on the exterior wall surface. This kind of material not only achieves low construction cost, but also has high durability under hot & dry weather with easy maintenance.

Link to the Environment 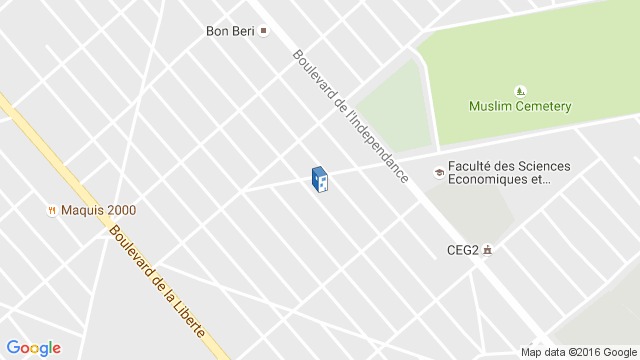 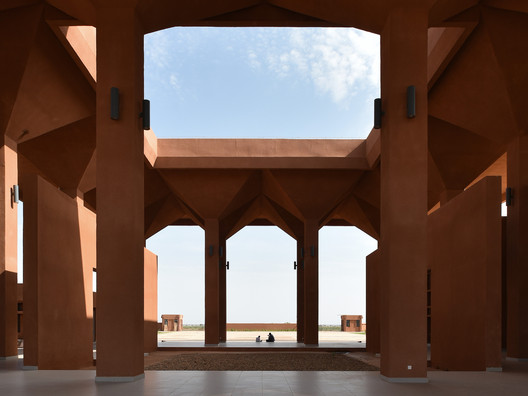