Mangroves are vital for stabilizing shorelines, but their recent depletion presents impending doom for coastal habitats.

Aptum Architecture and CEMEX Research Group might have a solution. Their collaborative project, Rhizolith Island (Isla Rhizolith), is a prototype that explores the potential for floating concrete structures to revitalize deteriorating shorelines. The structure was just installed in Cartagena, Columbia as part of the RC 2016 (Reunion del Concreto), an international Expo and Academic Conference on Concrete. 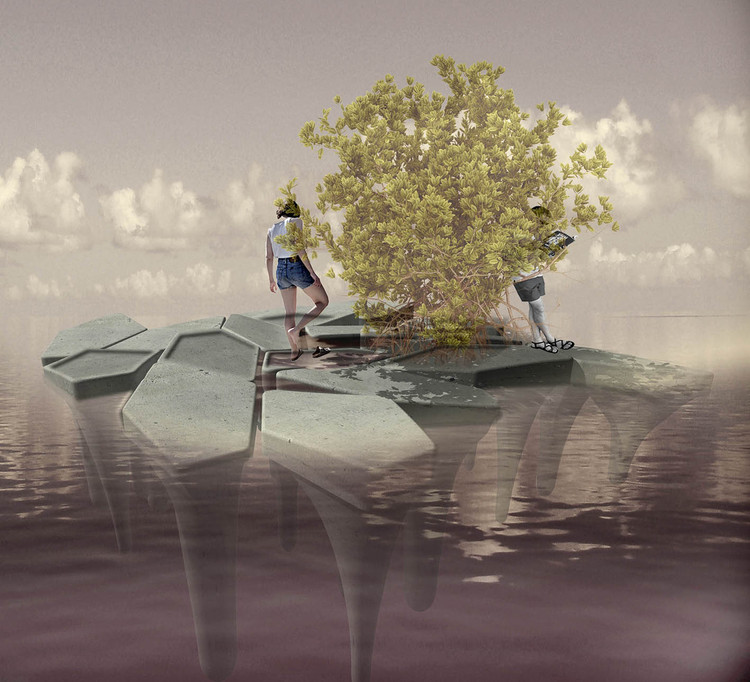 Due to sedimentary imbalance, rising sea-levels, and flooding, coastal erosion along the Colombian coast has increased its span. Rhizolith Island attempts to emulate the mangroves, which control sediments through their roots, thereby preventing shoreline decay. Essentially comprised of "root-like" concrete components and planted mangroves, the project's natural and artificial elements create an organic Rhizolith — a root system encased in mineral matter.

The design is constructed from two separate pieces: a head and a fin made from concrete mixes and casting. Because the head's concrete mixture is lighter than water, the two elements can float in addition to allowing mangrove roots to grow through the head. In contrast, the fin's mixture (UHPC: ultra high-performance concrete) is denser and strengthens the foundation, promoting marine life and barnacle growth.

Through the system's porosity and form, the force of the water is mitigated. For the first phase of the project, the planted mangroves will be protected by encasement tubes to harbor mangrove seedlings. Anchored at the top of the concrete pieces, the mangrove's roots will eventually be able to spread and even grow onto the shore in the second phase.

Cienaga de la Virgen Lagoon and Isla Grande are two sites chosen for further development. Their locations offer the same type of long-term restoration (5-10 years), allowing the mangroves to flourish into an organic buffer zones for the coastlines.