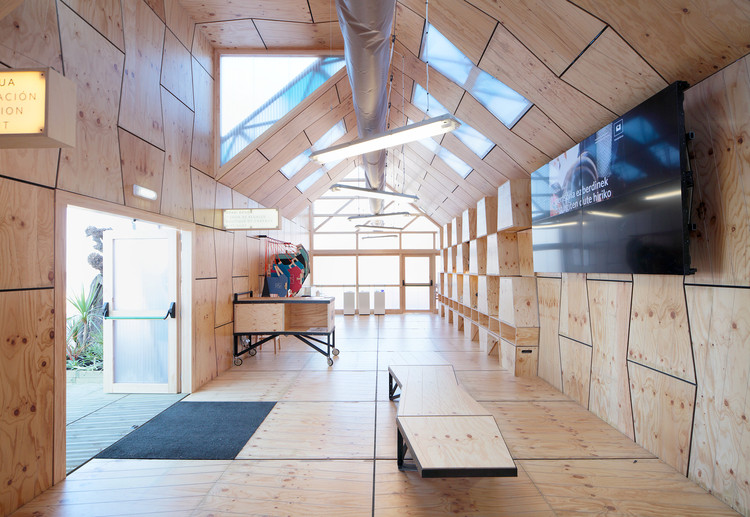 Text description provided by the architects. Design for 2017.

Our proposal doesn’t start from architecture.

Our proposal doesn’t start with the design of an ephemeral pavilion.

Our proposal is not even a structure that can be reused.

Our proposal intends to be an exercise of urbanism that creates a space for thinking and producing the city of tomorrow.

We have tried to work backwards, from the future to the present, to see how an information pavilion could mean something for San Sebastian, the European capital of culture. We designed a process of transformation of the city and explored ways in which this challenge could become a pavilion. Our strategy is to intervene in San Sebastian’s public space by designing a pavilion that can be constructed as an assembled chrysalis containing the result of the future of the city.

We propose a new line of street furniture for San Sebastian that can be distributed in the streets and squares from January 2017, but until then it will remain under the form of an assembled information pavilion.

The pavilion is an assembly of 278 "bow tie" benches with a metal frame and wooden seats which can be combined in many ways. All seats face inwards and become a continuous wooden folding plane. The metal legs of the benches form the three dimensional structure and support for the waterproof tent fabric.

We propose that the cultural event “DSS2016“ can become a propulsor to literally transform the city, and through this open strategy allow a change that can be observed once the event is over. San Sebastian won't be the same again. In 2017 all the particles of the pavilion will be transformed into urban furniture and compose a landscape of the scattered pavilion.

A pavilion can affect a whole city.

The strategy to design a pavilion made with benches is a response to an ecologic matter, not only in terms of reusing material and optimizing processes but also from the standpoint that architecture becomes more sustainable if more agents can be affected by it in any way. Our desire is that the pavilion makes it possible for many to transform their daily lives through it. Even if you as a San Sebastian citizen that hasn’t used the services provided by the pavilion nor has participated in any of the activities the cultural capital offers which are informed in the pavilion, its construction will be able to offer you service some day in the shape of furniture.

Dismantling the DSS2016 pavilion cannot be done in a conventional way. The bench dismantling system, the share-out process and the way its next destination is decided requires a plan. The plan is to gather and reach agreements with local agents, PTAs, technicians and public administration in order to decide which spaces or institutions are the ones to receive what are today the walls, floors and roof of the pavilion.

The settlement where the pavilion is located is very special. Probably the best and most representative place in the city, it is the neuralgic centre of a society strongly rooted in the sea. The pavilion does not camouflage its presence, it camouflages its shape, its size and its direction. This aesthetic and conceptual gesture comes to life as dazzle camouflage, developed by the British Admiralty to mislead the terrible German U-boots. The pavilions dazzle camouflage is painted with the most representative colours of the Gipuzkoan capital, the colours of Txuri-Urdin (white and blue).

The same way a movie is the result of the effort of many individuals and collectives which are more or less visible and in each case can be nominated for an Oscar and their effort and work can be acknowledged in that way, architecture must show the reality of its processes and acknowledge in an explicit way the summatory of collaborative work that every building requires, no matter how modest the building is.

So in order to make the shared authorship visible, inside the pavilion we can find a bow tie bench showing the credits of each and every member involved indispensably in the construction of the DSS2016 pavilion. 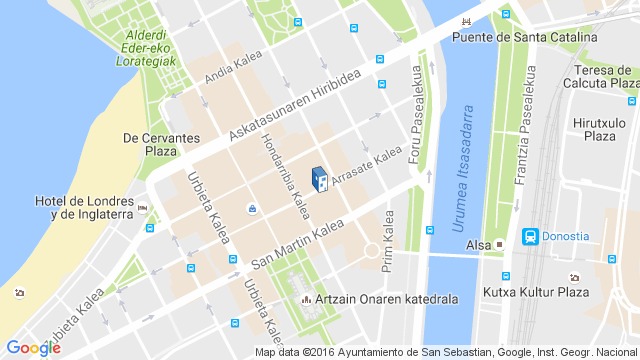 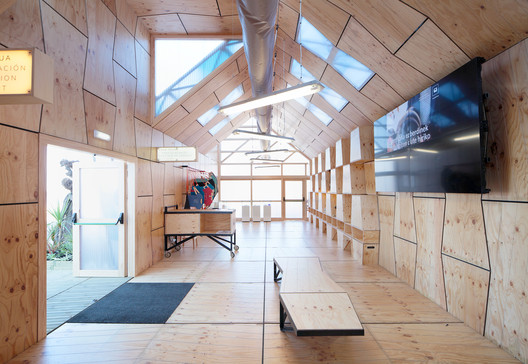