Save
A House in Trees / Nguyen Khac Phuoc Architects 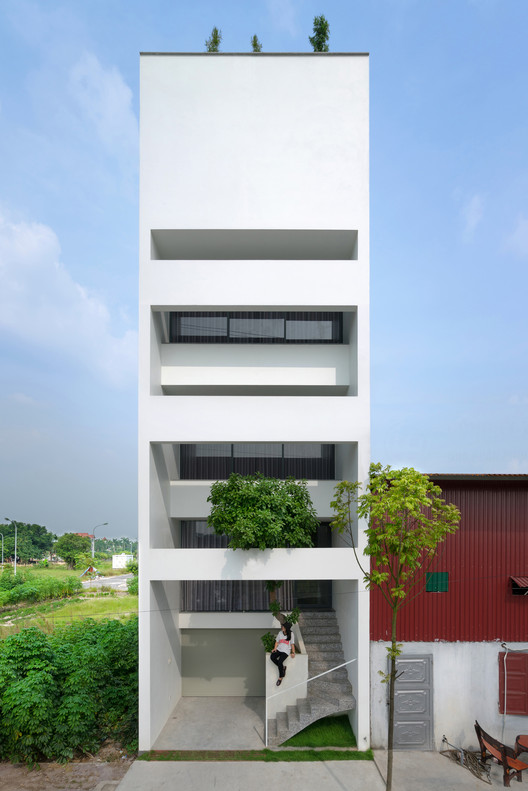 “A House in Trees” locates in a small narrow land, which was divided with the area of 5x15(m) in Tu Son town, Bac Ninh, Vietnam. This area is facing rapid industrialization and urbanization. There are several problems with the site such as noise and smog from traffic; and negative effects from industrial zone. The main façade is faced west.

The house is designed for a couple and their teenage daughter and son. The functions include 3 bedrooms with toilets, a living room, a kitchen, a garage and store and an entertainment room, worship, laundry. The owners want a house that could improve their living condition.

In this project, we propose 2 voids inside the house in order to solve the problems. The first void is placed at the entrance, which creates a padding to avoid the smug; shapes are created to avoid direct natural light.

The second void is placed at the center of the house, which plays as a point to balance the nature. At this space, nature is appeared with its elements such as trees, natural light,the wind, and rains.

Stairs and lobbies are in the center connecting spaces. People may feel that they walk on the top of trees when moving in the space.

A garden is opened to the central void, connecting living room, kitchen and dining room. The owners can feel natural light, trees, wind and rain in their bedrooms. At any space inside the house, the owner still could get in touch with nature directly.

“A house in trees “was born with its unique context. Through this project, we want to balance the nature in order to make better living condition for people while urbanization and industrialization are impacting badly to the environment.