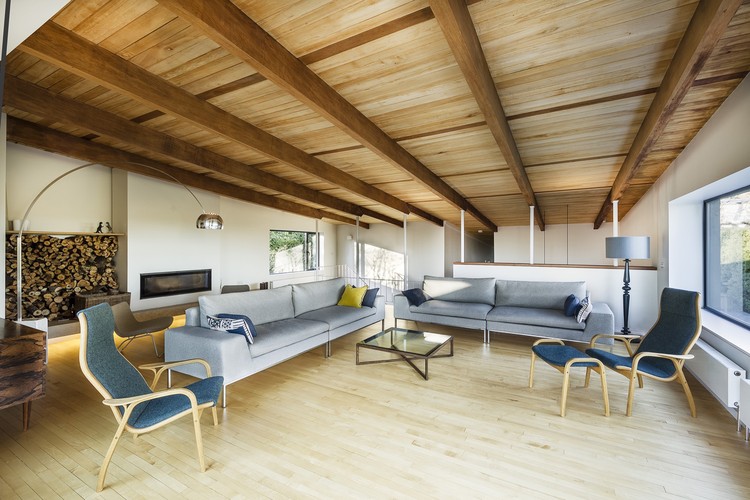 Text description provided by the architects. Hartrow is a substantial detached 1960s house in Winchester.

We were approached by the client in 2010 to look at completely remodelling and extending the existing house - which had not been touched since the sixties and was in dire need of a complete overhaul.

The existing building was essentially a split 5-level house, and the original internal arrangement made no connection between the levels. There was also no connection between the inside and the outside, as both the kitchen and living areas were on the top levels.  The carport at the bottom of the house was virtually unusable due to the steep access down the side of the house.

Our brief was to transform this outdated 1960s arrangement into a 21st century family home.

We started by enclosing the carport under the house with large glazed sliders and turning this into a new family room with kitchen. This allows for an inside – outside connection that didn’t exist before. To avoid this family room being detached from the rest of the house, we punched a vertical hole through the five split stories. This void now allows all levels to connect through the house.

The existing timber cladding was in a very poor state, and needed replacing.  Poor detailing and inadequate ventilation aged this otherwise durable timber prematurely. Along with replacing timber cladding we added insulation, appropriate building paper, and allowed for adequate insulation behind the weatherboarding.

The existing roof is supported on hardwood beams at 1250mm centres that run the length of the building. On top of these are 2-inch thick balsawood planks and hardboard, onto which a bituminous roof was laid. Internally, the ceiling was visually attractive, although the roof did not provide enough thermal insulation and the building suffered from overheating in the summer, whilst being very cold in winter.  We installed plenty of new insulation and replaced the existing felt roof with crisp black zinc. Internally we went to great lengths to preserve the character of the original roof and we carefully refurbished the hardwood beams and balsawood planks. We also retained the existing beech hardwood floor, which was sanded and oiled.

We refurbished the house throughout including replacing windows, re-plumbing and re-wiring. The work was carried out in two phases and completed in the summer of 2014.

Product Description. The sliding Reynaers glazing on the bottom floor has been instrumental in achieving the light, open, flexible space that the clients wanted. By recessing the lower and upper tracks in the ceiling and floor finishes we were able to achieve a more seamless transition from the family room to the terrace when the doors are open. When closed, the façade appears uncluttered thanks to the large size of the sliding panes that Reynaers could provide, allowing just two panes to be used for each face.