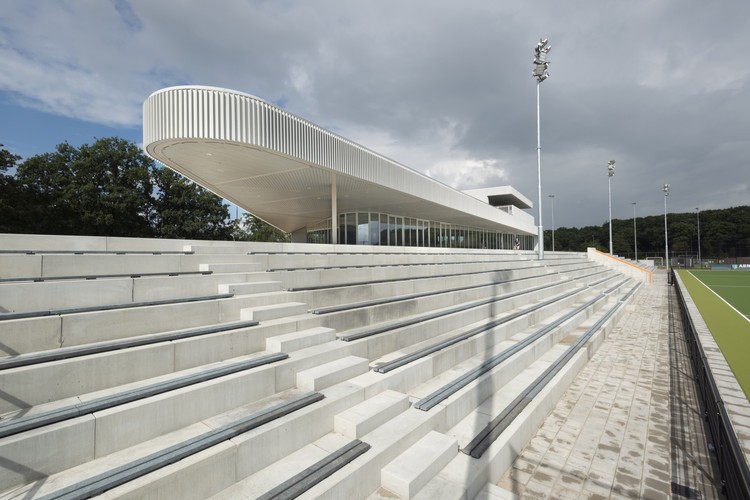 Diederendirrix architecture & urban development designed a striking pavilion for hockey club Oranje-Rood. The large canopy built from laminated wooden joists in a triangular grid, supported by a few pillars, is extraordinary. The structure extends from the outside into the inside and creates a special interior with an unobstructed view of the fields. This year, Oranje-Rood originated from a merger between the successful topclass sports club Oranje-Zwart (first division champions for the last three years) and recreational sports club EMHC. This new start called for a new, modern clubhouse. The pavilion was festively opened in September 2016.

Splendid View Over All Hockey Fields

The triangular building with rounded corners is fitted in on a wedge-shaped area between the hockey fields. The pavilion is located on a plinth consisting of an overgrown slope on one side and a stand with 1600 seats on the other side. Underneath, comfortable changing rooms and a physiotherapy room were built, which meet the requirements of a top-class sport accommodation.

On the raised level the luxurious canteen is located, from where you can view the club’s eight hockey fields. The very large canopy will always keep you dry while watching the matches outside. There is room for a business club on the pavilion’s level.

The smart façades consist of light grey, preserved pine slats. The vertical slats accentuate the rounded corners. The inside is also dominated by concrete and wood, including in the long bar. As commissioner, the city of Eindhoven set high sustainability goals. The EPC (Energy Performance Coefficient) is 0.3 due to the building´s triangular shape, the solar panels on the roof and the high insulation levels.

Frans van Duivenboden, president of Oranje-Rood: “Not the largest clubhouse of the Netherlands, but definitely the coolest.”

Product Description. We gave the clubhouse a distinctive triangle shape to fit it carefully in the context, in this way you have a beautiful view on all the surrounding hockey fields from the building. We rounded the corners and gave the facade a certain softness, because we didn’t want to make the building to hard and detached.

Therefore we chose to give the facade a wooden covering. However, not only a uniform flat finish with shelves, but we’ve added vertical ribs at a distance of 132mm from each other, that form a consistent vertical grid over the facade. Because the view of the building is almost always from an angle, the facades and the receding canopy have a tactility that makes the pavilion much kinder and gentler.

A very light gray color enhances the lightness and friendliness of the building. There is however consciously decided not to use a grey aging natural wood. This would after some time give a splotchy image, especially at the transitions between the canopy and facade. Hence the choice not to use hardwood, but modified pine wood treated with a light gray stain as to remain its beauty in the future.

The facade builder hanged the boards and slats in prefabricated panels to the rear structure, whereby the fixation was on the backside of the panels, therewith leaving the rhythm of the ribs undisturbed by visible fasteners. 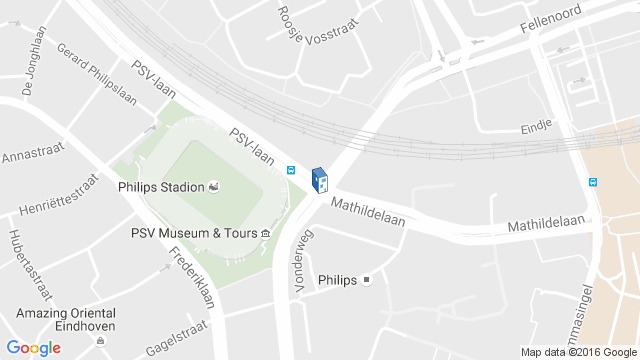