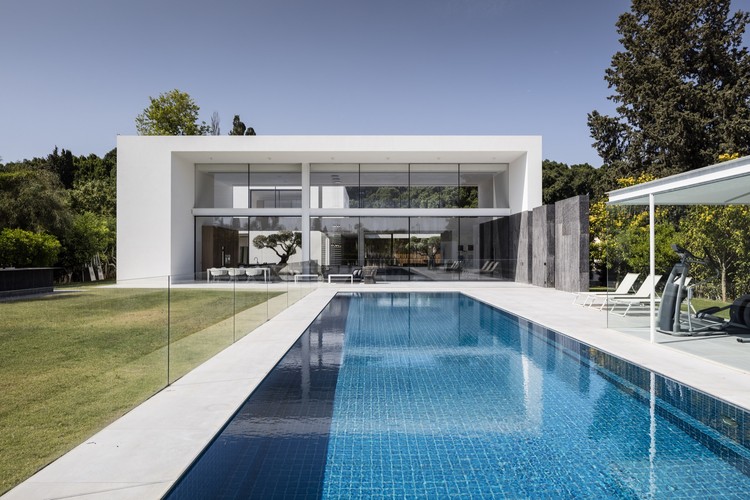 Text description provided by the architects. Since the dawn of history, ‘public’ architecture – the architecture constructed by institutions of church and state, served as a tool in shaping the consciousness of the masses. Its massive dimensions, layout of spaces, and choice of materials, were all done with the objective of creating in the viewer and visitor a sense of moving between dimensions – from the day-to-day, the simple and the often inferior – to a place that is sublime, inspiring and of awesome majesty – homes to those among the people raised to privilege– the representatives of God on earth.

The Pharaohs in Ancient Egypt, influenced by the Nile which flows in linear manner, designed their temples as a voluminous physical experience. En route, temple visitors move over long stretches that become more convoluted and ever deeper, passing through spaces where each exposes a clue to the next, and where each transition appears to take you closer to the exalted and the shocking, which only the favored will get to see.

Western modern architecture sought to break free of its propaganda-based foundations and serve as a reflection of the values of a society, its culture, and its technological capabilities. It is intended to serve the public and the objectives of a nation’s government – no longer in the form of holy places, but as functional public buildings that are welcoming and democratic in nature. Accordingly, the importance of changing the mind-set of the visitor has been almost entirely absent from the design discourse in recent centuries.

When it comes to ‘grassroots architecture’ – namely, the architecture used in planning private residences – the experience of a change in consciousness upon entering a house is hardly ever thought of nowadays in the design process, having lost its importance quite some time ago. The living spaces and the living room are thus made as one piece, separated from the street by nothing more than a door, both physically and metaphorically.

The house under discussion here is about this experience. It is this dynamic that is generated in its design, explaining it to the visitor simply by placing him or her at its center from the first moment they stand in front of the facade facing the street — an opaque monolithic slab, covered in dark stone. The impermeability of the wall is softened by an avenue of young trees directing the visitor along the length of the paved footpath, directly into an inner courtyard surrounded by a semi-opaque stretch of wood, the first in a series of internal courtyards that form a key principle in the design of the house.

Walking along the path, as indeed the entry into the enclosed grounds, is part of the process of separating from the outside world and contemplating the present moment more deeply. Full attention can now be given to the structure, captured in its spaces like a prisoner – as we stand in front of a large, transparent curtain wall on which we can observe what is going on in the house in absolute transparency, something reserved for visitors invited because they appreciate such loveliness.

Although the facade facing the street is designed as an opaque mass and seems to hold an enigmatic secret, as soon as one crosses the line of the wooden ‘arbours’, the spaces of the house are suddenly visible in all their simplicity. The process of stepping into opaqueness and then catching sight of the private interior as it emerges from the sealed, the hidden, and the monolithic, into an open and light-filled space, would almost seem to confirm that you have entered the place now exposed – the private parts of the house. Here the geometry is simple and minimalist, and is clean and transparent in its form and materials, almost as if it were someone that had turned all his cards face up on the table.

The other internal courtyards, as well as the glass balustrade that encloses the swimming pool, separating it from the other outside spaces, seemingly bring together all the visitor’s experiences into a focused and penetrating experience, one that clearly spells out the boundaries of what is permitted and possible, and defines the house as a private and intimate experience.