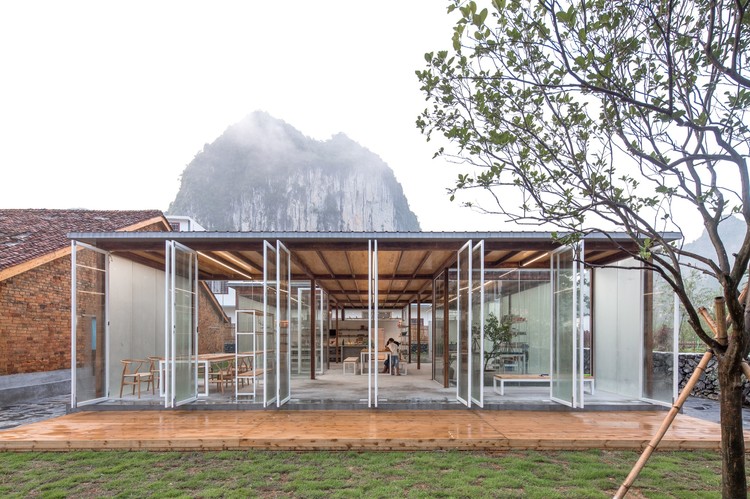 Text description provided by the architects. The South Yard, namely a southern courtyard, is located in Sanjia, Yangshan Village, Guling Town, Mashan County, Nanning, Guangxi Province. Through ages, this tranquil and plain village has been settled by three clans: Huang, Liang and Tang, thus named Sanjia (Three Surnames). The unparalleled Karst Landform surrounds the village, forming a green barrier naturally. In the bottom of mountains, a brooklet flows slowly through the village, with children swimming and housewives washing vegetables and clothes beside it. The melodious sound of three-part folk music comes from far away, attractive and pleasant to the ear.

The birth of the South Yard begins with the 'Beautiful Village Reconstruction Project'. Under the dramatic reconstruction of village, most of old houses were removed, leaving a lonely old cob-brick house beside a creek, hidden in a corn field. Originally as a private dwelling with a history of more than sixty years, the house has been repaired many times by its owner, ended up abandoned. And its owner built a new brick-concrete house in the opposite of the river. Partly dilapidated, its adobe walls was mottled and ruined and the inner space was cramped and dim. But surprisingly the gable wall forward brooklet was intact with a angle of its roof nearly 45°. Shaded by verdant hills in the distance and surrounded by new houses of village, It looks considerably unique.

Living in Nanning, owner teacher Huang always devotes herself to rural building construction and children’s natural education activities. With her persistence and effort, this old house has been preserved integrally, being the only memorial of this village. The South Yard is the connector between city and country. Architects conceived an ‘old and new’ method: reconstructing the old house completely and constructing a new open building in an open area beside it.

Because of many interlaced walls inside the old house，internal space was narrow. Therefore, architects removed the internal walls and rebuilt them with steel structure to form larger space and to add a layer inside. The steel structure and brick walls support a new roof and make the dilapidated wall more stable. Workers rebuilt the collapsed wall with cob bricks removed from internal walls, torn down tiles from roof and then put down them again carefully. Old and new materials, earthly yellow bricks, white steel structure and brown boarding, are blended in the old house, producing gallery-like artistic effect. Brilliant sunshine pouring from skylights and flickering shadows make people feel the flight of time, and make this 60-year-old house revitalization.

Architects built a new house in a corn field between the old house and the brooklet to enlarge the space and increase the functions of the old house. In order to preserve the gable wall, the new house was built separately from the old one. The majority of walls made from glass not only ensure transparency of the new house but also serve as a foil for the dignified old one. The main structure of the new house is made from high strength bamboo fiber composites which are as slender and warm as woods. Courtyards with different scales planned in every direction of the new building and glass with various transparency bring outside picturesque views into the building. The only cob-brick wall of the new house is installed on one side of the kitchen, which is design to correspond to the texture of the old one. The cob-brick walls of these two buildings will show similar trace of time after many years. These two buildings, a new one and an old one, a heavy one and a light one, provide the perfect foil for one another.

Although villagers did not fully understand why this kind of house was built in the village after project of South Yard was completed, all of them said they like these two buildings because of the familiar bricks and tiles of the old one and the kindly new one. Children in the village like coming here and because of many courtyards inside the building they can run, play and read lightheartedly. Tourists like coming here as well and they find this is a place completely open and full of the color of living. So they like to have a rest and take a picture of the buildings.

The South Yard is the last old building of Sanjia Village. It witnesses the transition of village’s history and keeps close watch on the stunning natural beauty with a brand new living posture. 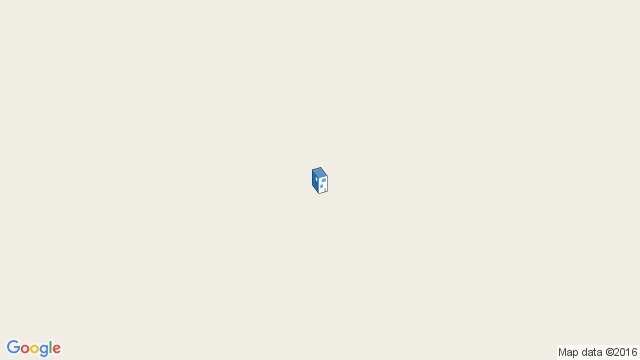 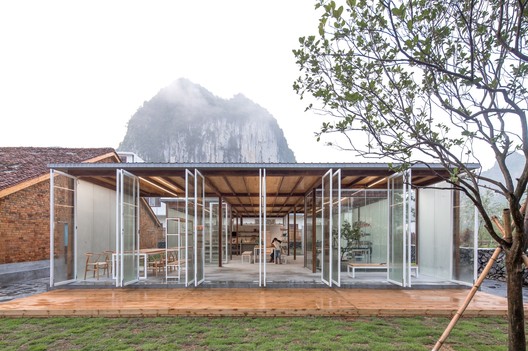