Save
House Under Eaves / MRTN Architects 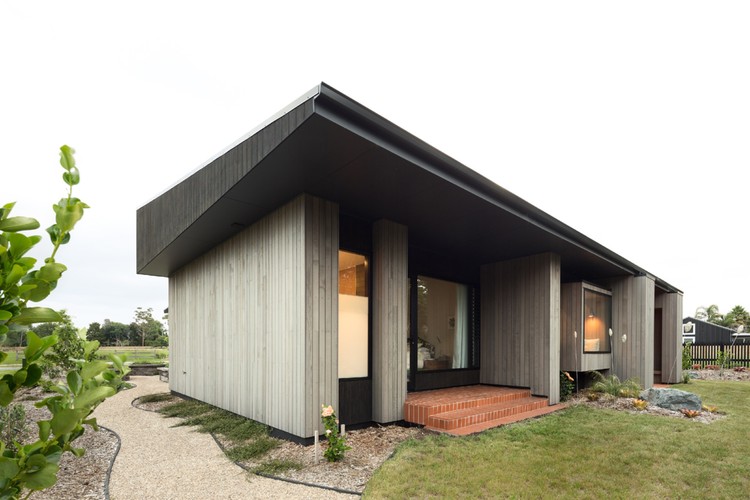 Text description provided by the architects. Located in a new subdivision less than an hour from Auckland this new house was one of the first built on a flat site that has been split up to create well sized semi-suburban semi-coastal sections on what was once pastoral land.

Faced with a flat vacant lot with no neighbours the design strategy was to anticipate the soon to be context and also to create a sense of retreat from the street. We also wanted to respect the client’s privacy and provide a layered separation from front to back.

We proposed the use of shadow as a design material, creating an oversized dark roof that rests on thick cedar clad walls. The roof protects from the elements, heavy downpours are common, but also the extended black eaves and long shadows are protective in nature. From the interior the black eaves frame the landscape views and enhance the appearance of the surrounding greenery.

As you approach the subdivision from a car the house appears as a simple gable form, referencing the work of the early New Zealand modernist Group Architects. From the street the roof is held up by the cedar clad walls and the front door is screened by a poured in place concrete wall. Moving through the home however it is apparent that the house is a spilt gable form and the plan is dived in two, the front half is the garage, street entry and guest bedrooms while the rear half is the living spaces and owners bedroom. A glazed link connects the two wings located at the highest point of the roof. The glazed connection also provides, to the east, a secondary garden entry and, to the west, a sheltered evening outdoor dining
space.

The living areas are arranged either side of a wide cedar lined wall that continues from the garden to the rear through to the entry. This wall acts as a threshold separating the kitchen from the living and dining spaces. These spaces are also set on a lower level to the kitchen, so to enter you pass through the wide cedar wall and down a few steps creating separation through level change and material rather than walls and doors.   A high raked ceiling with exposed rafters to the living room as opposed to the flat ceilings found elsewhere. The high walls create room for the owner’s art collection but also imparting the sense of being in a covered outdoor room, which is enhanced by the glazed opening leading to an al fresco sitting room.

House Under Eave has a shifting scale; from the street the house appears as a compact assemblage of parts. On entering however the scale expands as you move through the plan and spills out to a verdant garden. It is in this space the owner can retreat to, connected to the garden but sheltered by the eave. 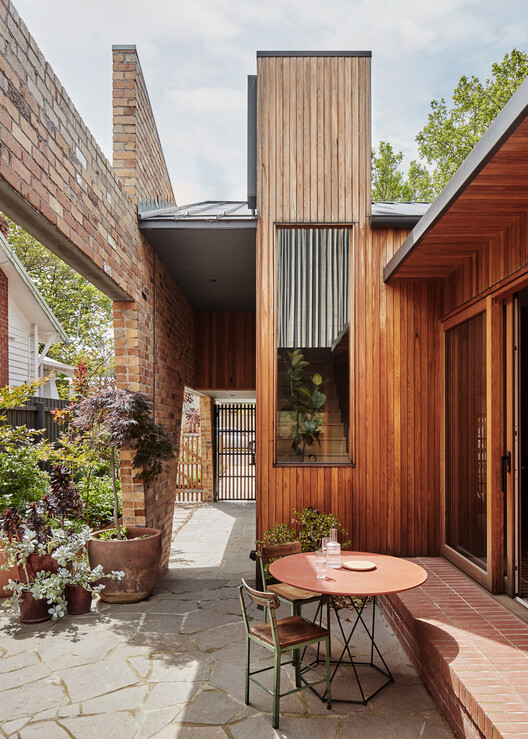